Movie studios are constantly on the lookout for the next big sensation, and they have no problem utilizing already established fan bases to do so. The industry seems to be going wild for remakes, re-imaginings, and sequels; it is fully aware that there is a built-in audience eager and more than willing to shell out their hard-earned cash to see their favorite characters. Attempting such adaptations can be a slippery slope, as fans of the original content have extremely high expectations that can often be quite the tall order to fill. And yet, there are myriad movies out there that exceed these standards tenfold, knocking it out of the cinematic park.

Television shows (both old and new) inspire some of the greatest and most lucrative fan-bases, a fact that Tinsel Town has greatly taken advantage of. From a trio of crime fighting ladies, to a captivating macabre family, and even a faithful mystery-solving pooch, the cinema is not afraid to rely on beloved and adored series for inspiration. Let’s take a look at the best movies made from TV shows.

The hit ‘80s police procedural show that helped skyrocket Johnny Depp to superstardom, 21 Jump Street focuses on a squad of young undercover police officers who investigate crimes in high schools and colleges. The series was a slam dunk with viewers and audiences, running for five seasons from 1987 to 1991 and becoming a beloved cult classic. The 2012 big screen adaptation features the hilarious talents of Jonah Hill and Channing Tatum as Schmidt and Jenko, a pair of police officers who are tasked with going undercover as high school students to investigate a new synthetic drug circulating. The film garnered positive reviews from critics and moviegoers, earning over $200 million worldwide. With a sharp script, satiric humor, and thrilling action sequences, 21 Jump Street is a fantastically funny flick that also contains cameos from the show’s original stars, Johnny Depp, Peter DeLuise and Holly Robinson Peete.

Related: These Are 8 of the Best Action Comedies, Ranked

The 1963 crime drama series The Fugitive centers on a doctor wrongly convicted of murder, who evades police custody and sets out to find the identity of the real killer. David Jannsen starred in the original show, which aired for four seasons and earned an Emmy in 1966 for Outstanding Dramatic Series. For the 1993 film, Hollywood great Harrison Ford stepped into the role of Dr. Richard Kimble, with Tommy Lee Jones as the relentless U.S. Marshal hunting him down. The action thriller spent six weeks at number one in the United States and is widely regarded as one of the greatest action films of the 1990s. Jones won the Academy Award for Best Supporting Actor for his portrayal, and critics couldn’t get enough of the dramatic and entertaining adaptation. The Washington Post called the picture, “A juggernaut of exaggeration, momentum, and thrills–without a single lapse of subtlety–”Fugitive” is pure energy, a perfect orchestration of heroism, villainy, suspense and comic relief.”

Pop culture phenomenon Charlie’s Angels was produced by Aaron Spelling and follows the crime-fighting adventures of a trio of women working at a private detective agency. Starring the dynamite Farrah Fawcett, Kate Jackson, and Jaclyn Smith, the 1976 series experienced huge popularity with audiences and helped Fawcett achieve international fame. Despite experiencing cast shake-ups, the show ran for five seasons and spawned a media franchise with the 2000 adaptation of the same name. Drew Barrymore produced and co-stars in the action comedy, alongside the impressive Cameron Diaz and Lucy Liu, as the tough and beautiful Dylan Sanders, Natalie Cook and Alex Munday, respectively, along with a feisty Bill Murray. Charlie’s Angels received praise for its leading trio’s powerhouse performances, in addition to the exciting action sequences and fun humor. The success of the adaptation led to a 2003 follow-up, Charlie’s Angels: Full Throttle.

The 1960s classic animated sitcom The Flintstones is set in a romanticized Stone Age and focuses on the activities of the titular family and their next-door-neighbors, the Rubbles. It was the first animated series to hold a prime-time slot on television, and was the most financially successful and longest-running network animated television series for three decades. The sitcom came to the silver screen in 1994, with John Goodman taking on the iconic role of Fred Flintstone and Elizabeth Perkins as his wife Wilma. Co-starring Rick Moranis and Rosie O’Donnell as their lovable buddies Barney and Betty Rubble, The Flintstones was celebrated by audiences and fans of the series for its faithfulness to its source material, as well as the cast’s portrayals and overall visuals. Though earning a less-than-warm reception from critics, the film was a box office hit and slam dunk performance for Goodman.

Tom Cruise’s status as a certified action star was cemented with 1996’s action spy flick Mission: Impossible, based on the 1966 television series of the same name. The film follows Ethan Hunt (Cruise) as he sets out on a mission to discover “the mole” who has framed him for the murders of his fellow Impossible Missions Force team members. The original Mission: Impossible featured Steven Hill and Peter Graves as the leaders of a secret team of government agents and aired for seven seasons. The Tom Cruise adaptation was the third highest grossing film of 1996 and garnered favorable reviews from critics, and went on to spawn a billion dollar franchise. The Mission: Impossible series is often cited as one of the best action franchises to date and continues to dominate the box office, with fans eagerly awaiting the upcoming 2023 sequel.

“They’re creepy, and they’re kooky, mysterious and spooky. They’re all together ooky…” Audiences across the world are familiar with the catchy and iconic theme song for the macabre 1964 sitcom The Addams Family. Detailing the misadventures of the spectacularly ghoulish Addams clan, the show was based on the characters from the Charles Addams New Yorker cartoons. Director Barry Sonnenfield made his big screen debut with the 1991 supernatural black comedy The Addams Family, with Hollywood heavy hitters Anjelica Huston, Raul Julia and Christopher Lloyd leading the picture. The Addams Family follows the eccentric titular family as they reconnect with what they believe to be a long-lost relative, and the movie was both a critical and financial hit. The film’s top-notch performances truly propels the playful comedy; for her role as the iconic Morticia, Huston was nominated for the Golden Globe Award for Best Actress. A follow-up sequel was released two years later, entitled The Addams Family Values.

The epic science-fiction extravaganza Star Trek is an iconic television series that first debuted in 1966, achieving cult classic status and becoming a pop culture phenomenon. Set in the 23rd Century, the show follows Captain James T. Kirk (William Shatner) and Science and First Officer Spock (Leonard Nimoy), as they and the crew of the U.S.S. Enterprise explores the galaxy. Though initially receiving low ratings, Star Trek eventually generated a franchise consisting of 13 feature films and 8 television series. It is heavily considered one of the most influential and popular TV shows of all time, and the original films are classics (especially The Wrath of Khan). Mastermind J.J. Abrams directed the 2009 reboot of the franchise, with Chris Pine and Zachary Quinto stepping into the legendary roles of Captain Kirk and Spock, respectively. Star Trek was acclaimed by film critics, with universal praise for its stunning visuals, fascinating story and compelling performances. Slate magazine called the adaptation, “a gift to those of us who loved the original series, that brainy, wonky, idealistic body of work that aired to almost no commercial success between 1966-69 and has since become a science fiction archetype and object of cult adoration.”

Undeniably one of the greatest TV cartoons of all time, Scooby-Doo is the mega hit animated franchise that since its debut in 1969, hasn’t slowed down a bit. The Saturday-morning cartoon series features the group of crime-solving teenage misfits as they investigate supposedly supernatural creatures. Scooby-Doo, Where Are You! is the first incarnation of the franchise, which also includes several films and multiple animated series. 2002’s live-action adventure comedy Scooby-Doo finds the Mystery Gang reunited at a horror-themed tropical island resort, after a two-year disbandment. The adaptation was perfectly cast and featured a gifted cast including Matthew Lillard, Sarah Michelle Gellar, Freddie Prinze Jr. and Linda Cardellini. Lillard specifically garnered rave reviews for his hilarious portrayal of Shaggy. Over the years, the film has maintained a large cult following and its success led to the 2004 sequel, Scooby-Doo 2: Monster’s Unleashed.

Michael Bay’s sci-fi action blockbuster Transformers combines computer animation with live-action, and was based on the ‘80s animated series and toy line. The 2007 adaptation showcases the ancient struggle between the heroic Autobots and the malicious Decepticons, and focuses on a teenager who gets caught up in the war. With an all star cast like Shia LaBeouf, Megan Fox, Tyrese Gibson and Josh Duhamel, the film also saw the return of the show’s original voice actor Peter Cullen, who reprised his role of Optimus Prime. Though critical response was mixed, Transformers was a triumph among audiences and fans of the franchise, and went on to gross over $700 million worldwide. Its outstanding visual effects earned universal praise and fans loved how the adaptation didn’t take itself too seriously. The film was followed by four lucrative sequels and a spin-off, with the newest installment Transformers: Rise of the Beasts scheduled for a 2023 release.

Here’s a ranking of the most noteworthy, impactful video game movie adaptions to date. 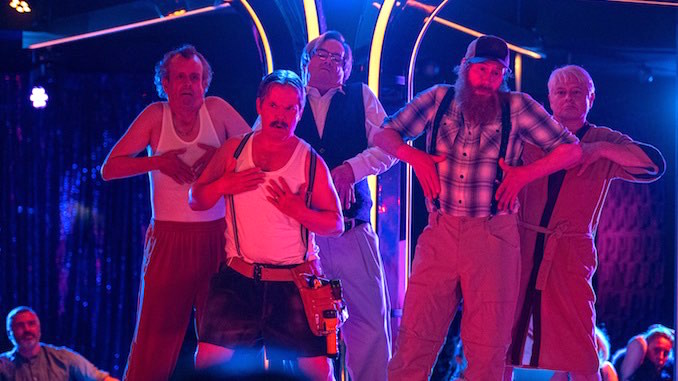 The Kids In The Hall: Everything We Know About the Amazon Web Series – TechnoSports

How to Get the Zone Wars Bundle in Fortnite

Best movies 2021: The Power of the Dog, The Lost Daughter and King Richard

What Is the Freedom Convoy? Trucker Protests in Canada Explained