Remarks by President Biden with Inspectors General on Commitment to Oversight, Accountability, and Transparency | The White House THE PRESIDENT: Well, look, you know, I want to thank you all for being here and for your updates.

When you’re — these are some of the — the Recovery Act was about $900 billion and the President used to always — President Obama used to like to always kid with me when he did the State of the Union message. He’d never tell me what he was going to say because I presided over the — the joint session as Vice President. And when we — it was a big gamble to decide we were going to spend $900 billion trying to get the economy back on its feet.

And the President said, “And, by the way, we’re going to make sure I’m turning it over to Joe.” And he started calling me “Sheriff Joe.” Well, the first thing I did was go to Earl Devaney and other inspectors general and said, “Look, we’re going to need a lot of work here.”

Because, look, the one thing I’ve learned — and you did when you were the mayor — and — is that people expect us to do what we say, and they don’t always get what they expect from elected officials.

And, for example, when the CARES Act was passed in the last administration, it was — it was a very meaningful piece of legislation. But the first thing the President did in the time — I was hollering a lot about it — was he fired the inspector general. There was one put in who was just fired. No inspector general had independent access.

And so — and I should acknowledge that — Earl Devaney. Earl was a stand-up guy. And I would meet with Earl once a week. I didn’t — I didn’t tell Earl what to do. But I found out from Earl what was happening, because he had carte blanche to know how every penny was being spent.

And — and when we came along with the two large pieces of legislation that tried to keep us — get us through the pandemic as well as bringing the economy back on its feet, it was clear to me that we were going to need the kind of oversight, and that’s why I called Gene. And I asked Gene to come in and be a coordinator of this.

And, you know, the — an example — his example — I think, Earl’s example is a reminder that the end result of independent analysis of whether it was waste and fraud in the effort to distribute that money through the $900 billion in the Recovery Act was independent analysis indicated that there were less than two tenths of 1 percent of waste, fraud, or abuse — less than two tenths.

It was heralded as one of the most well-run programs in American history, in terms of size, scope, and did it do what it said it was going to do.

And — unfortunately, I earned the name from the — from the President when he said from the podium that I’m — you know, that “Sheriff Joe is going to be in charge.” I never thought of myself as a sheriff.

But it’s not the way to get things done not having really serious oversight. These programs are large. They’re consequential.

And, you know, in my administration, the watchdogs are back. You’re looking at them all here. All of you. And I really mean it. Look.

And it’s not just whether or not there is fraud going on or wasteful spending. I think I told Gene when I asked him to come in — was that I’d get phone calls — I get inspector generals telling me that the way they were going to spend the money that was in the recovery plan was that they were going to build a frisbee park in such and such a place.

And so there’s — for example, there’s a lot of money for bridges — and particularly bridges that are in disrepair, that need help.

Now, if there’s a bridge that’s really in trouble and it may collapse like the one in Pittsburgh did — and we knew that was going to be — it was in trouble; didn’t expect it to collapse — you know, and yet the money is being spent on a bridge that is not particularly needed but it works for the Democrat or Republican governor and mayor because it gets them to an area that they want to make sure their constituents are happy with — that their supporters are, I want to know that.

I want to know where the — where the money is — technically, it can be spent, but it may be the lowest priority in terms of safety for the bridges. And it goes across the board in everything we’re doing here.

And so, you know, the strong oversight is in how we’re going to deliver for the American people on time and on budget and making sure the investments we get to where they’re supposed to go.

I’ll give another example. There was a Midwestern state that had serious, serious problems with access off their interstate into the city. And they needed help, and it was clear the ramps had to be rebuilt to get into the city. But this particular governor decided that he was — his constituency was a rural constituency. He was going to put two lanes in the western part of the state to do it. So, I called and said, “What are you doing that for? You need — you badly need — you’re having accidents on this…”

Well, they — you know, he technically could do it, but practically it didn’t make a lot of sense. Now, that’s not your job as inspector generals, but your job as inspector generals is not only to remove waste and fraud, but — is the purpose of the law, from your perspective, being followed? Is it being wasted? Is it being wasted — not just the fraud, but is it a waste?

And so, you know, your work is essential. And — and one of the things that we tried to do in both these pieces of legislation that are very large — not just to become — not just the infrastructure bill, but what we’re spending — is we tried to make sure that we demonstrate to the American people that we’re spending the money well, that we’re doing what we said we were going to do.

And that’s why, if you notice, I tried to make sure that the legislation was written in such a way that it would bypass general assemblies and go straight to where it’s needed. Because the last thing — I’ve learned over the years that if you have something — you have X billion, 100 million going to a state and how its dollars allocated has to be — gone through the state legislature, well, guess what? Everybody is going to get a piece of it. It’s not going to go where it’s most badly needed.

So, what we do, we’ve had funding go directly to cities, directly to the county, and directly to — be able to pass — and some of it to the state legislature.

So, all of this is about the American people being able to look at what we’re doing and say, “Hm, they did that pretty well, I guess. Okay. I get it. They didn’t waste it.”

And so, you know, I — I think the work you’re doing is really important.

And I want to make it clear to the press that’s here: Nobody in my administration is telling the inspector generals what they have to do. They’re totally independent. They make a judgment. If they want to investigate something, do it. If we — period. So, let’s find out what’s going wrong and what’s going right and what help you need in order to determine if you’re not getting the information you need.

And so, because I know there’s a — I’ll conclude by saying there’s a lack of — for the last 10 years — and we got to change it — a lack of, sort of, faith in government doing exactly what it says it’s going to do.

And I’m going to turn it back to you, Mitch. And then we’re going to go into —

THE PRESIDENT: — more detail. I guess.

Q Your reaction to the American killed in Ukraine, sir?

THE PRESIDENT: It’s very sad. He left a little infant baby behind.

Influencer Marketing: 10 things to keep in mind as we enter 2022 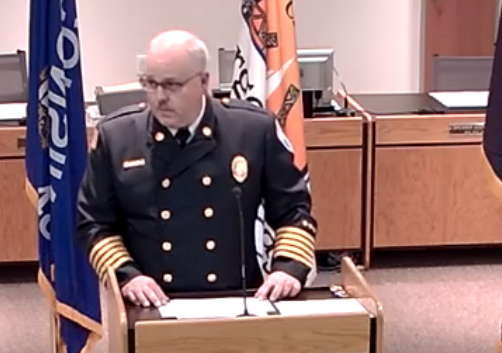 What Is a Firefighter Worth?

5 Tools to Monitor Your SEO Competitors

Colorado doctors learn how to deal with COVID stress