Korea will lift its outdoor mask rules from Monday, a year and six months after being implemented.

Prime Minister Kim Boo-kyum announced the decision on Friday in his opening remarks at a Covid-19 response meeting.

“The government promised to make a decision on the lifting of the outdoor mask requirement after monitoring the virus situation for two weeks after lifting the social distancing measures on April 18,” Kim said. “Although there were some concerns, we couldn’t ignore the inconvenience people experience from wearing a mask even when they walk alone outside or go on a picnic with their families.”

He then explained the domestic virus situation, stating that the capabilities of medical facilities are “in a stable condition,” and cited countries that lifted mask mandates right after peaks of the Omicron wave didn’t experience major hikes in infections afterward, such as France , New Zealand and Singapore.

However, masks will still be required for outdoor rallies, performances, or sports games attended by more than 49 people.

Wearing facemasks will be “strongly advised” for people with Covid-19 symptoms or high-risk groups such as the elderly or the unvaccinated, and in crowded spaces where it is difficult to maintain a one-meter distance.

The indoor mask-wearing requirement remains in place. According to the health authorities, “indoor” refers to all structures separated from the outside by partitions on all sides, and transportation means such as buses, taxis, trains, ships, aircraft, and other types of vehicles.

With the move, Korea is taking one step closer to a “return to normalcy”. Most social distancing measures, such as limits on private gatherings and business hours, were lifted from April 18. Face-to-face visits at nursing hospitals will be temporarily allowed for three weeks from April 30 in celebration of family month in May.

The legal requirement to wear a facemask had been in place in Korea since Oct. 13, 2020.

In the early days of the pandemic in February 2020, masks were in short supply across the country. Prices soared, and masks were sold out online and offline, leading to a nationwide “mask crisis.”

In response, the government temporarily restricted mask exports and introduced intensive supply and demand measures such as limiting the number of masks individuals could buy to two per week on designated days of the week depending on birth year. 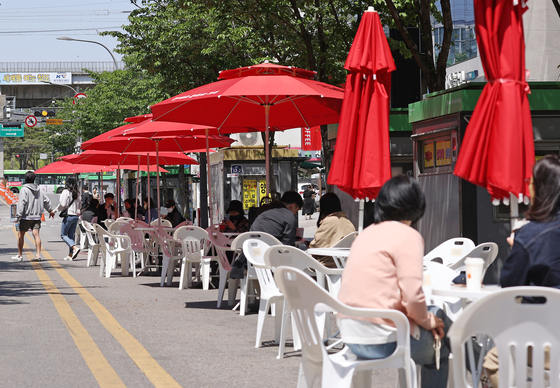 People chat under parasols installed at Sinchon’s Yonsei-ro in Seodaemun District, western Seoul, on Sunday afternoon. The district announced that it will install parasols every Friday from 2 pm to 10 pm Sunday night on the Yonsei-ro car-free street to help revitalize the street. [YONHAP]

Conflicts between the current government and incoming president Yoon Suk-yeol’s administration over Covid-19 policy continued. Following the government’s end to the outdoor mask mandate, the presidential transition team on Friday, saying “repeatedly expressed regret that it is too early to lift the outdoor mask rule at this point.”

“We cannot help but question whether the government’s decision is based on scientific [consideration] and what policy measures have been prepared in case of a surge in virus cases in the future,” said Hong Kyung-hee, deputy spokesperson for the team.

The chief of the transition team chief Ahn Cheol-soo also criticized the move as a “hasty judgment without clear scientific evidence,” raising questions that the government “is trying to give credit to themselves” for the contribution to the success of preventive measures against Covid-19. While announcing a 100-day roadmap for Covid-19 response measures on April 27, Ahn said the outdoor mask rule could be lifted within 30 days of Yoon’s inauguration on May 10 — in other words, at the end of this month .

Jeong Eun-kyeong, commissioner of the Korea Disease Control and Prevention Agency (KDCA), noted, “We did not make a decision on the outdoor mask mandate politically,” adding it is “a difference on when and how.”

“The announcement is not a ‘declaration of mask-free’ indicating facemasks are no longer needed outdoors,” Jeong said. “Even now masks weren’t required as long as a two-meter distance was maintained, but there were difficulties in how to apply this in daily life, and we actualized these points.”

The country added 81 more virus-related deaths on Sunday, slightly up from 70 the previous day and bringing the death toll to 22,875. How To Do Technical SEO For Ecommerce Websites