Identifying the greatest ‘70s cars to be featured in a movie can be a daunting task. On one hand, the ‘70s produced some of the best films based on the idea of car enthusiasm and racing, making some choices a no-brainer. But on the other hand, cars were so special in this period, it wouldn’t be difficult to make a case for any movie produced during this decade. As they all featured in some way or form, iconic cars that are still cherished today.

The film industry was also in the midst of a creative renaissance, releasing dozens, if not hundreds, of films largely considered to be indicative of a golden age. The combination of a new generation of directors, a global-wide obsession with automobiles, and the need for leisure activities and entertainment ended up being a successful formula to drive movie-goers to the theater.

Ultimately, inspiring generations of gear heads and auto enthusiasts to come. These are some of the most iconic movie cars of the ‘70s.

Dirty Harry Callahan, portrayed by Clint Eastwood, was known for getting the job done, no matter the amount of property damage he causes. In the mean streets of San Francisco, California in the ‘70s, Callahan was known for prowling the Bay Area in his unmarked 1968 Ford Galaxie 500. Criminals would rebuke the growl of his V8 engine when he came sliding around a corner. According to automobile catalog, the Galaxie Police Interceptor was capable of 360-hp and produced a neck-breaking 459 lb-ft of torque.

It must have been quite hard for Harry to keep a low profile in a car that measured 35 feet long, but with 0-60 mph time estimated at 6.7 seconds, it won’t be difficult to keep pace when his 428 Ford engine blows his cover.

Unanimously considered to be the most realistic racing movie ever, the 1971 film Le Mans, stars Steve McQueen as the fictional racer, Michael Delaney. Delaney is portrayed to be battling his inner demons, caused by a crash that saw the death of a fellow racer. A crash in which McQueen’s, Delaney, was considered to be responsible for.

Featuring the iconic Porsche 917K in competition livery, Delaney not only clashes with his Porsche teammates, but German Racer, Erich Stahler; in the equally stunning, Ferrari 512. Known for his steely demeanor, the German (like most movies in the ‘70s) was portrayed as the antagonist. Also, not unlike most Ferrari drivers during their racing heyday.

In a bit of interesting trivia, the Ferrari 512s were supplied by a Belgian distributor, after Enzo Ferrari declined to participate, due in large part to the Porsche-heavy favoritism featured in the movie. One could imagine it had something to do with Porsche’s back-to-back Le Mans victories in 1970 and 1971, at the expense of, you guessed it: Enzo and his Ferrari 512.

Related: Here’s Why The Porsche 917 Is Priceless

Often cited to contain the greatest car chase scene of all-time, The French Connection, follows two NYPD narcotics detectives in pursuit of a wealthy, French drug dealer. After narrowly avoiding a French hitman, Gene Hackman, portraying the role of Popeye, gives chase as the hitman boards a train. It’s at this point where the iconic scene begins.

Hackman’s character commandeers a pedestrian’s 1971 Pontic LeMans and gives chase after the elevated train. As Popeye blisters through the streets of New York, the Pontiac’s V8 is more than capable of tailing the subway. After bulldozing multiple cars on the way, Popeye and the LeMans arrive at the station in time to incapacitate the hitman.

Paving the way for films like Cannonball, Death Race 2000, and others, The Gumball Rally was a low budget comedy in 1976, based around the idea of an illicit coast-to-coast race, inspired by a bored businessman in New York City. Once Michael Bannon, portrayed by Michael Sarrazin, sends out the “Gumball” code word, a group of enthusiasts gathers as quickly as possible to await instructions. Usually to the extent of no catalytic converters, and no 55 mph speed limits.

The Gumball Rally features a bevy of iconic cars, but no more than Franco’s Ferrari Daytona. Forever living in infamy for his line, “the first rule of Italian driving: what’s behind me is not important” as we hear the Daytona’s 4.4L, V12 screaming in the background.

Not only is The Gumball Rally famous for inspiring an entire new genre of automotive films, but has been credited as the inspiration behind the Gumball 3000, an annual, 3,000-mile coast-to-coast race with a vision to combine: cars, music, fashion, and entertainment.

Largely seen as one of the most iconic scenes to feature a car, The Spy Who Loved Me, is more familiarly known as, “The Bond movie with the Lotus submarine.” Largely in part to a forgettable script, and increasingly stale development of Bond and the Bond characters.

The beautiful, Lotus Espirit stole the show (like most Bond cars do), when facing its sure demise in the form of an attack helicopter. But no worry for Roger Moore, as he utters the iconic line, “Can you swim?” as the wedge-shaped, Espirit dives off the dock and into the ocean. At the flip of a lever, the car is scene transforming into a submarine to whisk them to safety. 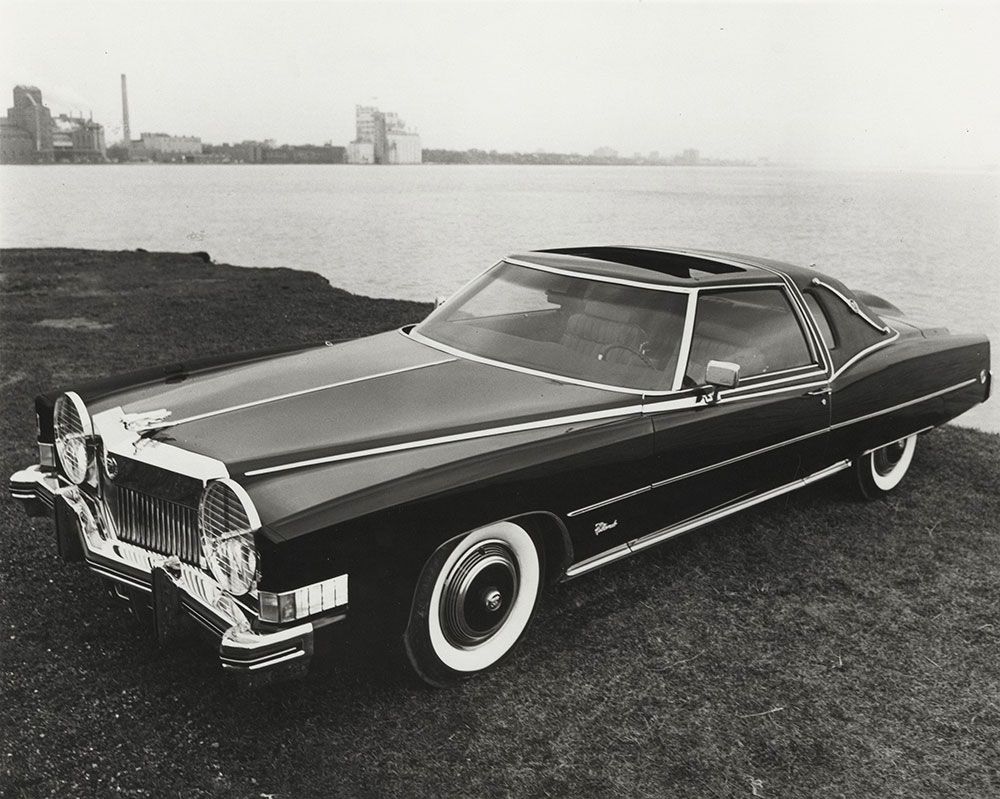 Contrary to popular opinion, not all iconic ‘70s movie cars are exotic, super-cars. Nor are they all beefy, muscle cars loaded with massive V8 engines. The 1972, Blaxploitation film, SuperFly proves just that. Taking the behemoth Cadillac El Dorado, and transforming it into an outlandish, gaudy, land-yacht, fit for the finest of cocaine dealers. Ron O’Neal portrays, Youngblood Priest, a cocaine dealer trying desperately to leave the underworld of drug distribution. During the opening scene, we are introduced to the chrome-clad Cadillac, as Priest cruises through New York City, on his way to a meeting.

The 1971 Cadillac El Dorado featured in the film is largely responsible for starting the “Pimpmobile” movement in America. Where car customizers would fit their cars with loud paint jobs, cover it in chrome, and deck out the interior with all sorts of exotic materials. In a similar sense to the Lowrider movement, the Pimpmobile movement gave representation to a group of people largely excluded from car enthusiasm, due to status, race, and economics. Quite possibly making the SuperFly Cadillac, one of the most important cars in any ‘70s movie.

Everything You Should Know About The 632 Crate Engine

The 632 crate engine from Chevrolet already draws all the attention of the automobile market.


Jacob is a is a writer and gearhead splitting time between Southern California and Phoenix, Arizona. When he’s not wrenching on his and his wife’s questionable fleet of cars; he’s learning DIY repair, researching car culture and history, or casually browsing used cars. Jacob cut his teeth writing for the now defunct, Oppositelock, before the website was blown up.

How Kakekkorinrin Became One of the Most Popular Online Casinos – Gameindustry.com