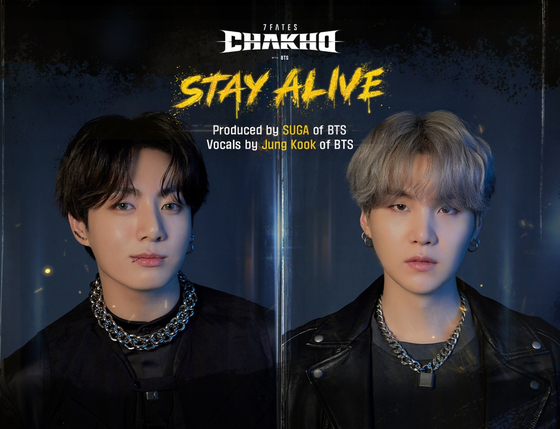 A poster for the upcoming single ″Stay Alive,” which features on the original soundtrack for the Naver webtoon ″7Fates: Chakho” [HYBE]


A song for the original soundtrack (OST) from BTS-inspired web novel and webtoon “7Fates: Chakho” is scheduled for release at 11 a.m. Saturday through Naver Webtoon, according to HYBE on Thursday.

The title of the song is “Stay Alive.” Suga of BTS participated in producing the song while Jungkook sang it. The title suggests the harsh fate the seven protagonists are destined to face and contains the message that the most important thing is to stay alive in this cruel world.

Inspired by the chakho-gapsa, or tiger hunters, of the Joseon Dynasty (1392-1910), “7Fates: Chakho” is an urban fantasy web novel set in the near future featuring protagonists inspired by BTS members. Naver Webtoon collaborated with the band’s agency HYBE to publish the narrative from Jan. 15.

The web novel and webtoon is published every Saturday and is being serviced in 10 different languages.

The webtoon initially received mixed reviews due to its lack of connection with the band although it was being promoted as a BTS-inspired story. However, the web novel and webtoon surpassed a total of 15 million views merely within two days of their release, HYBE reported in January.

We Used AI To Turn Popular YA Book Characters Into Real People, Then Compared Them To The Movie Casting