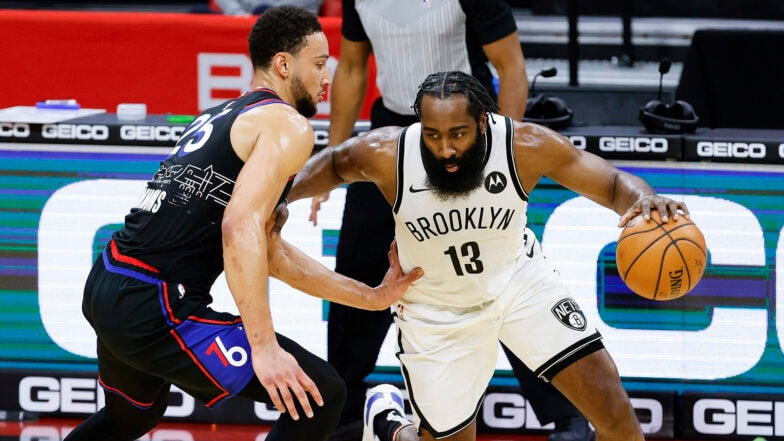 The Eastern Conference rivals reportedly have agreed to a huge deal before the deadline on Thursday.

Harden, the 2018 Kia NBA MVP, was acquired by the Nets last season. But the partnership between Harden, Kevin Durant and Kyrie Irving never reached the levels the trio envisioned when they teamed together. Now, Harden gets the chance to chase a championship ring alongside Joel Embiid and the Sixers.

The trade ends the Ben Simmons saga in Philadelphia, where the former All-Star guard has yet to play a game this season due to disagreements between Simmons and the franchise. The 25-year-old, 6-foot-11 guard had requested a trade away from the team.

In addition to Simmons, the Nets add sharpshooter Curry and veteran big man Drummond. Curry, a 31-year-old guard, is averaging a career-high 15.0 points and 4.0 assists on 48.5 FG% and 40.0 3P% this season. Drummond, a former All-Star, is averaging 6.1 points and 8.8 rebounds over 49 games with Philadelphia.

The Nets (29-25) are currently riding a nine-game losing streak, which has dropped the team to No. 8 in the East standings. After a solid start to the season, things started to unravel when Durant was sidelined with an MCL sprain in mid-January. The Nets have posted a record of 2-10 without Durant since the injury.

The addition of Simmons should help the Nets offset the absences of Irving, who is unable to play in home games due to New York City’s COVID-19 vaccination protocols.

The Sixers — who also receive Millsap, a veteran forward averaging 3.4 points and 3.7 rebounds in his 16th NBA season — hope the Harden addition is the extra spark the team needs to get over the hump in the Eastern Conference playoffs. With Embiid playing at an MVP level, the team expects Harden to shine alongside the versatile 7-footer. Harden is averaging 22.5 points this season, his lowest scoring average since his third season in the NBA during 2011-12. He’s shooting 41.4% from the field and a career-low 33.2% from 3-point.

The next matchup between the Sixers and Nets is set for March 10 in Philadelphia on TNT.