Piling PH debt: When is it a cause for worry? 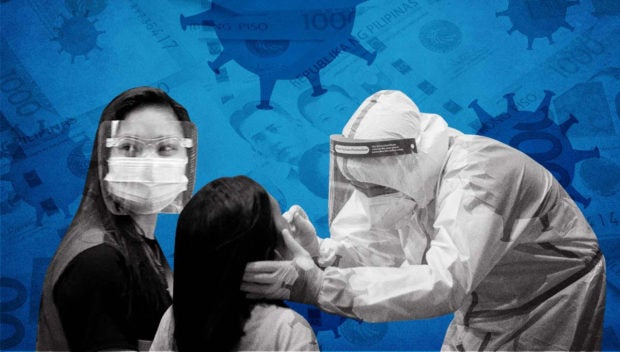 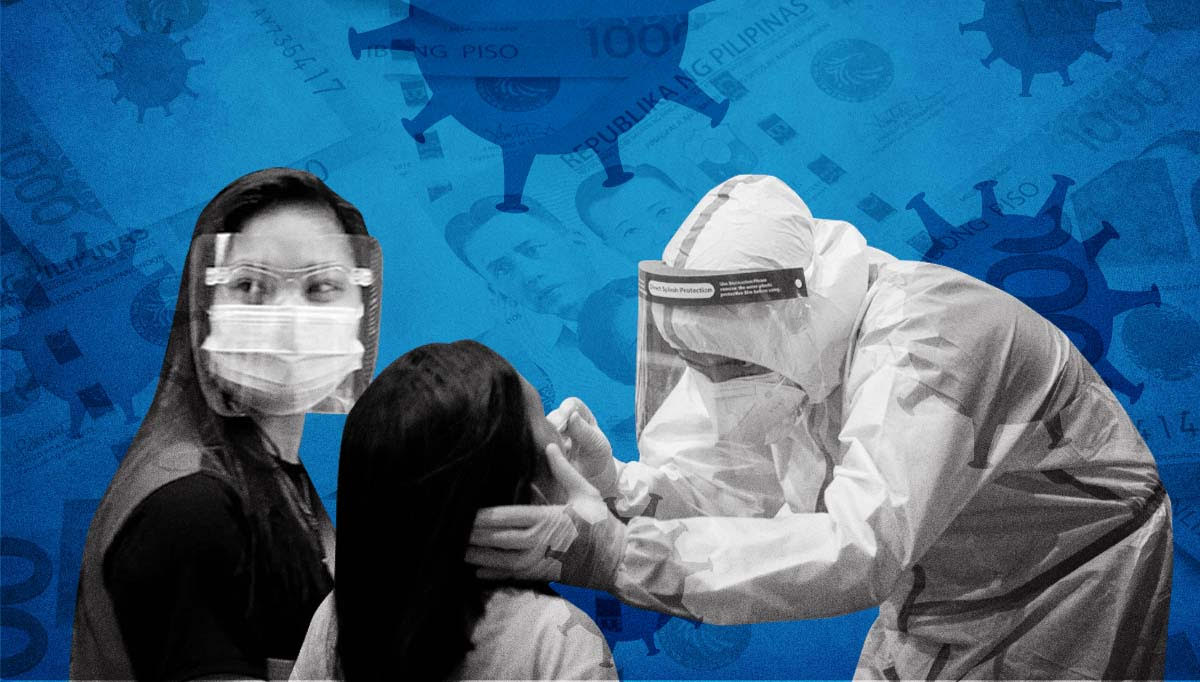 MANILA, Philippines—As the world enters into year three of the COVID pandemic, one of the biggest concerns in the Philippines was whether the country’s piling debt—mostly incurred for the government’s COVID war chest—had been effectively used for pandemic response.

A column piece on Feb. 3 by INQUIRER.net has highlighted concerns on the country’s continuously ballooning debt, which would eventually be handled by the next administration—but more importantly, will be paid by Filipinos in the coming years.

“Fortunately, the worst of the Omicron surge seems to be over, but the debt burden is here to stay and, as Finance Secretary Carlos Dominguez III said, a major issue that the next Philippine president will have to address if the Philippine economy is to return to the pink of health,” the column said.

“But more than arguing over the wisdom of taking on more debt, what is more important for pandemic-weary Filipinos is the reassurance that the debt that they will eventually pay for goes to effective pandemic response strategies and will not end up bankrolling failed programs or worse, lining the pockets of unscrupulous government officials and their cohorts,” it added.

In this article, INQUIRER.net will discuss more the Philippines’ accumulated debt so far, detail how much of the money from the government’s fund dedicated for the fight against COVID-19 has trickled down to the public, and try to answer the question of whether the public should be alarmed about the country’s monstrous debts.

The country’s total outstanding debt, based on preliminary data from the Bureau of Treasury (BTr), has reached P11.73 trillion by end of December last year.

The figure would show that the government’s debt grew by nearly 19.7 percent or P2 trillion over the course of 12 months or from P9.8 trillion recorded by end of 2020. 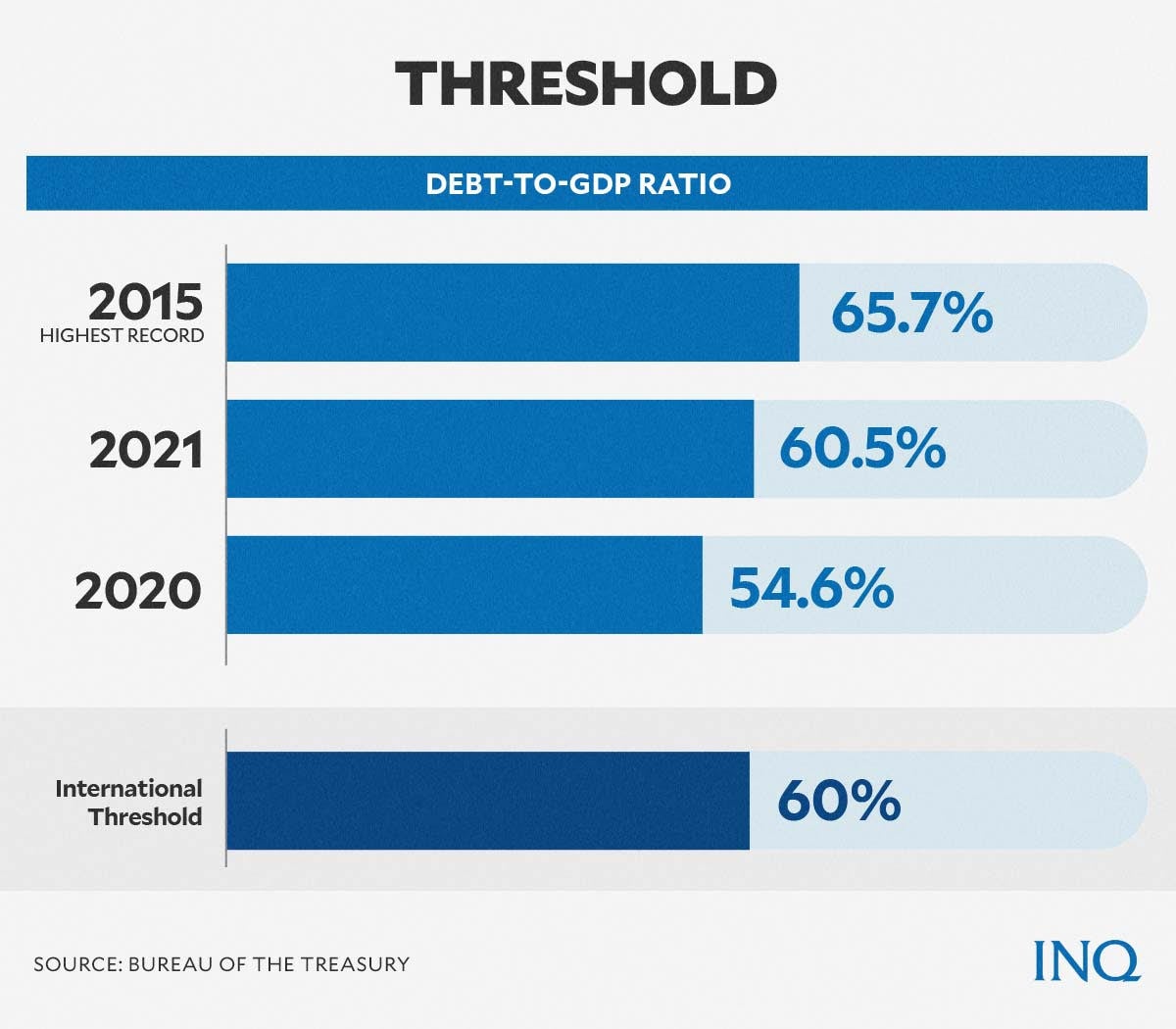 Domestically-sourced debt accounted for P9.17 trillion of the total outstanding debt, while P3.56 trillion came from external debt from loans from multilateral lenders and bilateral development partners as well as offshore commercial borrowings through sovereign bonds.

The Department of Finance (DOF) has recently revealed that the country has received a combined P1.32 trillion worth of foreign borrowings and grants since March 2020 to help finance COVID response.

To aid the government’s COVID-19 vaccination program, additional loans from multilateral banks worth at least P58.4 billion were secured by the country last year, which included: 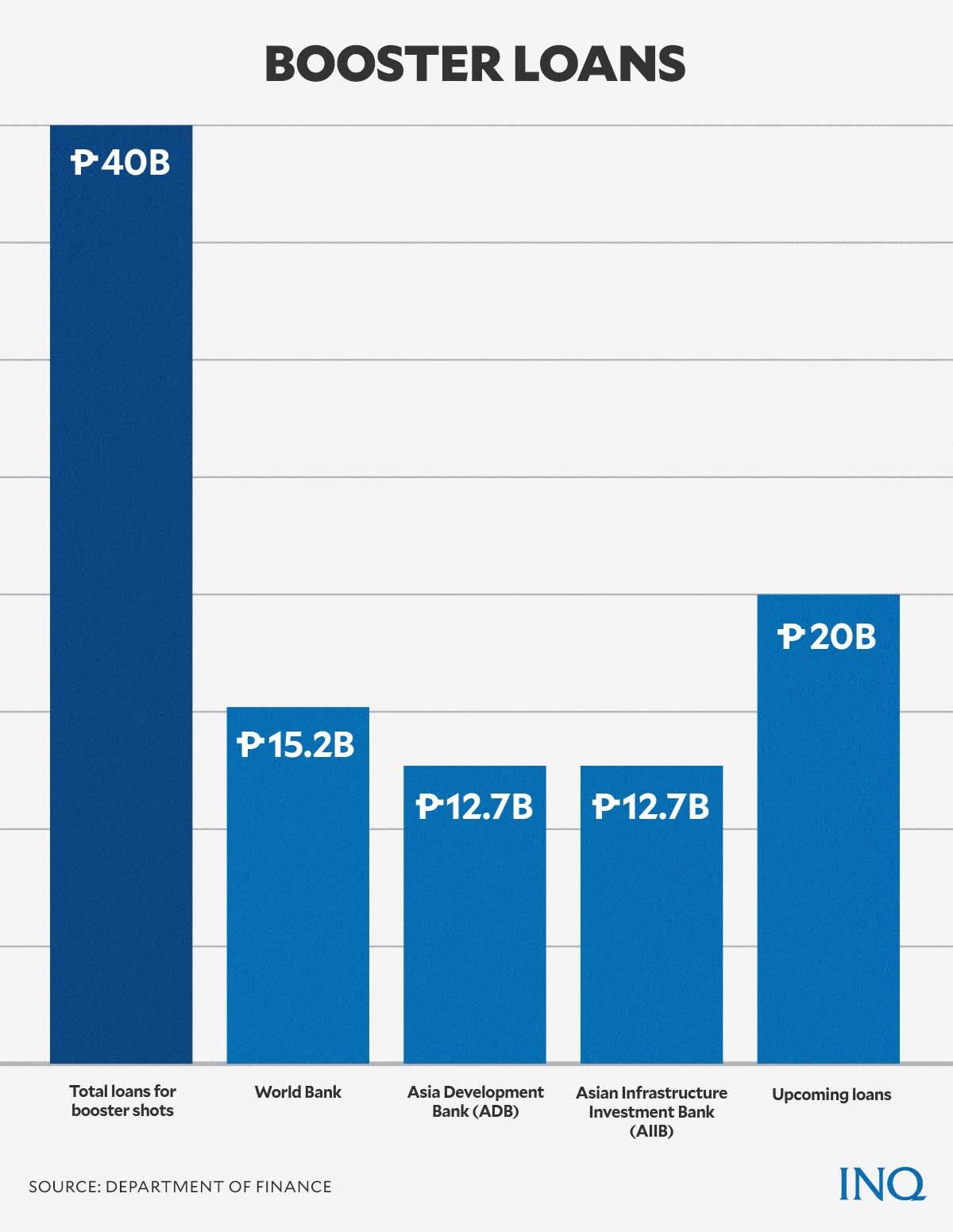 A separate P41 billion in concessional loans from multilateral lenders, expected to take effect this month, were also sought by the government to fund more COVID-19 booster shots.

With more debts expected to be incurred this year, a senior economist from the ING Bank Media said debt raters might start to look at the scarring impact of the pandemic on economic activity and “and how weak growth might affect the overall fiscal health of the country.”

“From this prognosis, it is quite clear that debt watchers are now increasingly concerned about the medium-term growth prospects for the Philippines, suggesting that the so-called ‘solid fundamentals’ are now being questioned,” said Nicholas Mapa.

The huge debt figures have caused concern among the public and raised the question: “Are we borrowing too much?”

Should the public worry?

To answer the question, it is important to look past the numbers and certain misconceptions about the national debt.

While it is understandable for the public to be concerned with the total debt owed by the national government, experts said it could be not as concerning as other people think.

First off, economist and Marikina Rep. Stella Quimbo answered the question: Is it wrong for a government to borrow money? 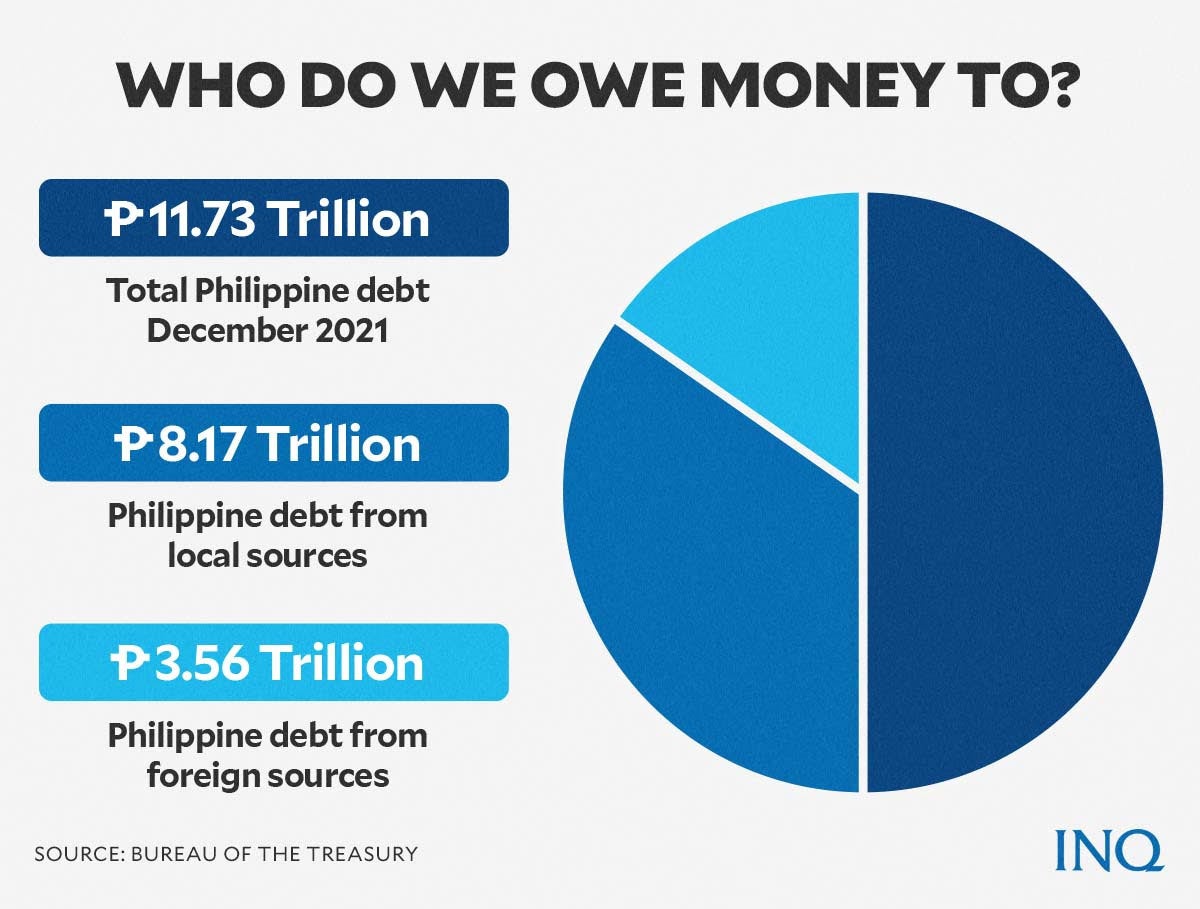 “It’s not wrong for a government to borrow because, like a business with not enough capital, they can borrow money. The government, when they want to expand a program, they can also borrow,” said Quimbo, speaking in Filipino.

“This pandemic, since many Filipinos need ayuda (cash assistance) and many small businesses are in need of support, the government needs to borrow money,” she added.

To help weigh in on the government’s debt, instead of focusing on the debt figures, Quimbo advised to look first at the country’s debt-to-GDP ratio—which compares a country’s debt to its financial output.

“It is possible that the country has a huge debt but also has a high output, [that means] the country can pay,” Quimbo explained.

“The debt-to-GDP ratio is like a thermometer, high numbers [translate to] high fever, the body gets weaker,” she said, adding that high debt and low GDP means that the country may not be able to pay their obligations.

The country’s debt-to-GDP ratio by end of December last year was 60.5 percent, slightly above the 60 percent international debt-to-GDP threshold.

Still, the BTr said it was “within the accepted sustainable threshold as the economy continues to recover from the effects of the pandemic.”

Quimbo said that while the numbers look high, it is not that concerning as other countries have had higher debt-to-GDP ratio amid the pandemic, including the United States (US) with 122 percent, Japan with 266 percent, France with 117 percent, Singapore with 140 percent, and Malaysia with 64 percent.

In an article published by the Philippine Center for Investigative Journalism (PCIJ), JC Punongbayan, Marianne Vital, and Jeff Arapoc of Usapang Econ explained how the sources of debt play a role in determining whether Filipinos should worry about the national debt.

“Contrary to popular belief, the public debt is not driven by foreign borrowings, but rather domestic debt,” they said.

Domestic debt, according to them, mainly from “the issuance of securities (like Treasury bonds and bills), and lately short-term loans from the Bangko Sentral ng Pilipinas.”

“Hence, while debt has been increasing as of late, external debt is still overshadowed by domestic debt. Filipinos are in fact the government’s biggest lenders,” they added.

To put it simply, they cited Filipino economist and Inquirer columnist Solita Monsod, who said:

READ: Should Filipinos worry about the national debt?

Another important factor to point out when weighing in on the national debt, according to former National Economic and Development Authority (NEDA) director-general Cielito Habito, is that the country’s debt is not the same as personal debts—“which must be fully paid off at some point.”

“The difference between a family and the government is that the latter can keep rolling over its debt—that is, borrow new loans to pay off previous ones—indefinitely into the future,” Habito said in a column published on INQUIRER.net.

“Thus, we need not be unduly alarmed at the thought, as some like to (misleadingly) describe it, that every Filipino carries around P107,000 in debt on his/her head (i.e., P11.92 trillion of national debt divided among 111 million Filipinos), as if we’d all have to pay such amount sooner or later,” he added.

Where did the money go?

When, for example, a small store owner borrowed money to be used for the business, someone will assume that the owner will use the money to buy more items to sell and not for gambling or other things that are not related to the business.

It should be the same with the country’s debt—the money should be used for programs that can help the nation recover from the impact of the COVID-19 pandemic. 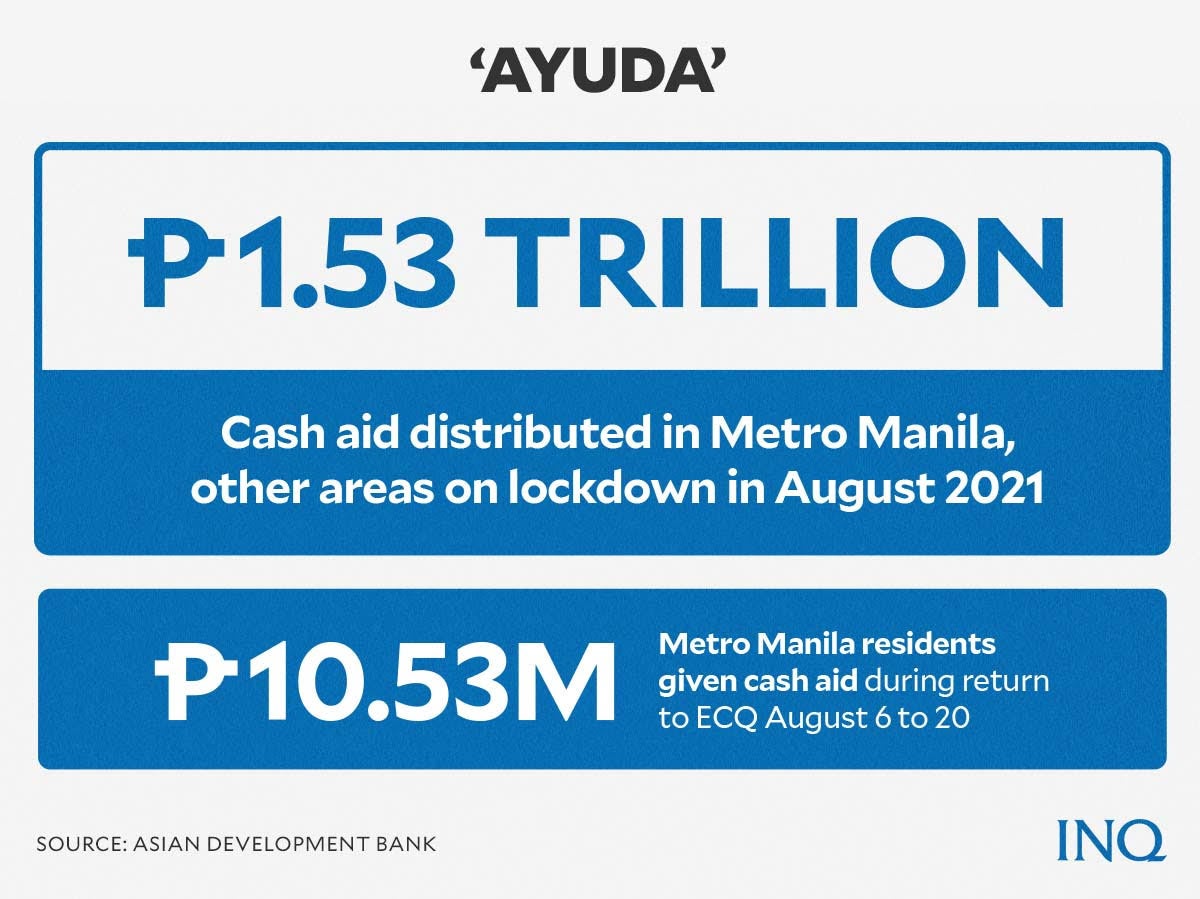 “It is also important for the country to have a program on how it can use the borrowed money,” said Quimbo, speaking in Filipino.

“If there is a clear and [concise] plan on how [the government will] use the funds it borrowed, there is no problem,” she added.

Initially, the Department of Budget and Management released P10.89 billion for residents covered by ECQ.

An additional P368 million was included after President Rodrigo Duterte on Aug. 12 approved the P3.78 billion allocation for the cash aid of residents in ECQ-hit Laguna and Bataan provinces and Metro Manila.

Data from the Manila-based Asian Development Bank’s (ADB) COVID-19 policy database showed that as of August 2021, over P1.53 trillion in cash aid had been distributed to vulnerable households in Metro Manila and other areas under ECQ. 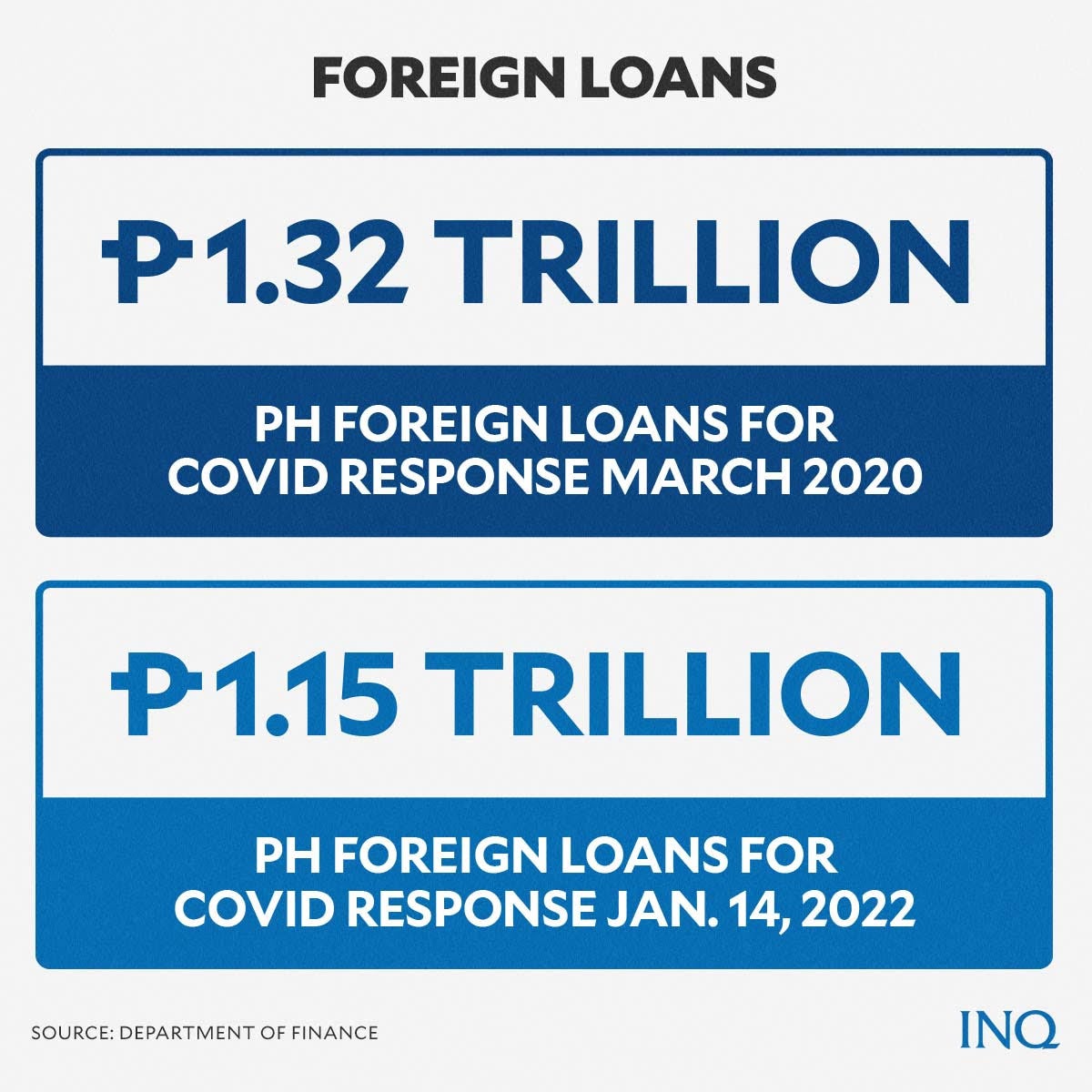 Around 10.9 million Metro Manila residents were able to receive cash aid from August 6 to 20, the ADB said.

As of October 2021, the World Bank said 4.73 million doses out of 13 million doses procured by the Philippines through the P25.1 billion COVID-19 Emergency Response Project Additional Financing had already arrived.


For more news about the novel coronavirus click here.

What you need to know about Coronavirus.


The Inquirer Foundation supports our healthcare frontliners and is still accepting cash donations to be deposited at Banco de Oro (BDO) current account #007960018860 or donate through PayMaya using this link .

Don’t miss out on the latest news and information.

What Is The Link Between Sugar Consumption And Cancer?