Summary: If OnePlus is serious about operating in this segment, they need to do a lot better than going so Lite on performance and features. The competition has far better options to deal with it from day 1.

Mumbai Indians and OnePlus have had an unremarkable 2022 to say the least, and the problems for both can be traced back to their respective drawing boards, Both have deviated from their core strength to play someone else’s game, and one can safely say that it hasn’t worked well for either. OnePlus is now targeting the lower midrange segment through the Nord CE series of phones, and with the addition of every new suffix, things seem to be going south.

While the Nord CE and CE 2 operated in the sub-25K price bracket, the Nord CE 2 Lite 5G looks to breach the Rs 20,000 mark and enter an even more crowded space. Are the brand name and its popular OxygenOS enough to woo the consumers in this highly competitive segment? Time to figure out.

OnePlus Nord CE 2 Lite 5G: Design (3.5/5)
The Nord CE 2 Lite looks pretty good for a lower mid-range phone. You don’t get a glass back here but it is made of good quality plastic with an equally good matte finish with a bit of lustre. That largely makes it free of fingerprints and smudge marks. The area around the rear camera tile has a glossy finish and a different texture that blends well with the rest of the back. There are no rough edges either. 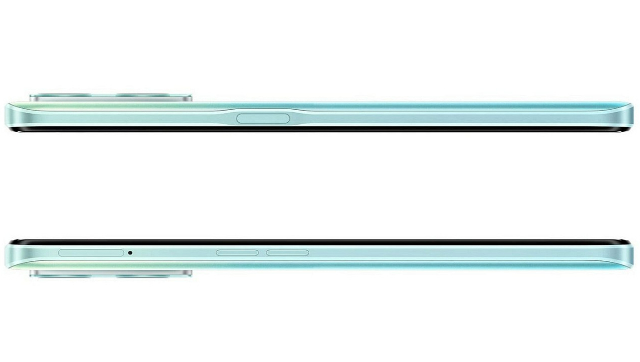 Like most budget phones, the bottom bezel is quite prominent and the punch-hole for the front camera is a tad bigger than usual. A volume rocker and a SIM + MicroSD card tray are located along the left edge of the phone, while the power button can be found on the right side. The surface of the power button also doubles up as a fingerprint scanner. The scanner isnt the most responsive around and at times I needed multiple attempts to unlock the phone. All this despite a fairly elaborate fingerprint registration process. The placement of the volume rocker and power button are well thought out and you don’t have to stretch your fingers too much to reach them. The bottom edge of the phone has a speaker, a USB-C charging port and a 3.5mm headphone jack that’s present on all CE series phones so far. The phone is 8.5 mm thick and weighs 195 grams which is slightly on the heavier side for a phone with a polycarbonate frame and back. OnePlus Nord CE 2 Lite 5G: Display (3.5/5)
The Nord CE 2 Lite’s display is the largest among all the Nord phones released prior to it, but not the best of the lot. If my memory serves me right, this is probably the first OnePlus phone to not have an AMOLED display. To keep the cost down, the company has opted for a 6.59-inch IPS LCD screen. But it does have a 120 Hz refresh rate; other Nord phones are stuck at 90 Hz. Having said that, one can notice the odd stutter in certain apps, something that one shouldn’t on a 120 Hz screen. Probably a software issue that the company needs to fix in a future update.

Though it doesn’t have the same black levels as an AMOLED screen, the display quality is not bad at all and perfectly acceptable for a budget phone. While the screen calibration options are not as elaborate as on more expensive OnePlus phones, you get Vivid and Natural color profiles to choose from in addition to manual color temperature adjustment.

OnePlus Nord CE 2 Lite 5G: Hardware and performance (3/5)
OnePlus has gone quite Lite on the processing power even for CE standards. The Nord CE 2 Lite is powered by a Qualcomm Snapdragon 695 5G chip that’s quite popular in the 15K to 20K segment, mainly because of its 5G compliance. You get two variants of the phone with 6 GB and 8 GB RAM, both with 128 GB UFS 2.2 storage. You can expand the storage further if you wish with a MicroSD card. The performance of the phone is acceptable for general usage but not flattering.

Let’s look at some benchmark numbers with reference to its non-Lite variant. In Geekbench 5, the CE 2 Lite scored 687 and 1981 points in the single core and multi-core benchmarks respectively. In comparison, the Nord CE 2 managed scores of 726 and 2160 in those tests. In PCMark Work 3.0 benchmark, it returned a score of 7777 which was just marginally lower than 7886 what the Nord CE 2 scored. So far so good as the drop in performance isn’t massive. In real-world usage, things work smoothly in day-to-day tasks, be it using social media apps or watching videos or switching between multiple apps. You can do a bit of gaming too but at medium to low settings on most occasions. The phone doesn’t get too hot, which is good. The solitary speaker on this phone is fairly loud for casual listening but with a stereo effect. You also get a 3.5mm headphone jack and Bluetooth 5.2 to plug in wired or wireless earphones. The call quality and reception were fine and gave us little reason to complain.

OnePlus Nord CE 2 Lite 5G: OS and User interface (3/5)
The OnePlus Nord CE 2 Lite runs the latest Android 12 with OxygenOS 12.1. This is where things get tricky. At one point we would have rejoiced at having a phone with OxygenOS for less than Rs 20,000, but not now. At least not till version 13 is out and that too if it does what it promises to. Let me explain. If you are a fan of the older OxygenOS UI, you are not going to enjoy version 12, as it looks like ColorOS on Oppo phones rather than its predecessor. Version 13 is where things are expected to return to normal. We shall wait and watch.

On the other hand, if you haven’t experienced older iterations of OxygenOS, or if phone UI doesn’t matter to you as much, OxygenOS 12 is perfectly usable. It offers a handful of tweaks to customize it further, and it doesn’t take long to get the hang of. Unlike phones from Xiaomi and Vivo, you don’t get ads and too many unwanted notifications on this phone, which is still great. Even better, the company has committed to two years of major Android updates and three years of security updates for this phone.

OnePlus Nord CE 2 Lite 5G: Camera performance (3/5)
None of the Nord CE series phones is great at photography and the CE 2 Lite doesn’t change that. To make matters worse, the company has dropped the 8MP ultrawide camera present in its predecessors in favor of a redundant 2MP depth sensor. You do get three cameras at the back with a combination of a 64MP primary camera, 2MP macro camera and 2MP depth sensor; the last two simply add ornamental value. The 64MP camera has to do most of the heavy lifting and that too isnt the best around. Its capabilities are further limited by not-so-powerful processing hardware. Case in point, none of the cameras here can record 4K videos. The max video resolution is capped at 1080p. In still photography, when shooting outdoors in well-lit conditions, the photos are captured well with lively colors and good dynamic range.

The colors feel a bit over-saturated (especially the reds) and not exactly like that of the original subject. That’s an old trick to make the photos look more vivid, and some actually like it that way. When shooting indoors or in sub-optimal lighting, the captured images look noticeably soft and low on detail. As the light drops, the output gets progressively worse. Night Mode does breathe some life into low-light photos but it takes a good 5-6 seconds to capture and process the photos.

The macro camera output is just like that of any other low-end 2MP macro camera, just about usable. The portrait shots with human subjects come out reasonably well but I don’t think the depth sensor actually makes them any better. While there is no telephoto camera on this phone, you get 2X and 4X zoom options in the camera app but that’s digital zoom. Again, 2X zoom shots in good lighting are pretty decent for social media, but 4X zoom shots look dull and void of detail. The 16MP front camera does a fair job with selfies and video calls.

OnePlus Nord CE 2 Lite 5G: Battery backup (3.5/5)
The battery backup on this phone is standard. The phone packs a 5000 mAh battery that easily lasts for a day and a half of moderate use. Unlike Nord CE 2, it doesn’t support 65W fast charging but only goes as high as 33W. A corresponding 33W fast charger is present in the bundle that takes it from 0 to 100% in about 75 minutes, which is manageable, but these days we are used to phones getting there in half the time, and even in this segment. OnePlus should have kept the charging time under an hour at least.

OnePlus Nord CE 2 Lite 5G: Price, verdict and competition
The 6 GB RAM variant of the OnePlus Nord CE 2 Lite 5G can be purchased for Rs 19,999, with the 8 GB RAM option priced Rs 2,000 higher. Yes, that makes it the most inexpensive OnePlus phone around, but is that a good enough reason to buy it? I think not, especially with the competition offering better options. Unfortunately for OnePlus, OxygenOS too is not a big enough draw anymore in its current avtar. Couple that with a non-AMOLED display and a sub-par camera performance, and you don’t exactly have a recipe for success here. As for the competition, Xiaomi has two solid handsets that can easily eclipse the Nord CE 2 Lite. The Redmi Note 11 Pro Plus 5G and Poco X4 Pro flaunt AMOLED displays with 120Hz refresh rate in addition to ultra-wide cameras and faster chargers. The Redmi phone also has a 108MP primary camera that should attract more attention. If you crave more processing power, you have the Realme 9 5G SE in this budget with a Snapdragon 778G SoC. And Realme UI is quite similar to the current iteration of OxygenOS.

And lastly, there’s the iQOO Z3 with a Snapdragon 768G chip as well as an ultra-wide camera, and a 55W fast charger, again under 20K. As you can see, the competition is better equipped in this segment, and we don’t have a compelling reason to recommend the OnePlus Nord CE 2 Lite 5G as it’s a bit too Lite on performance, features and value. If OnePlus wishes to seriously compete in this segment in the future, they better not carry a knife to a gunfight next time. Whatever happened to Never Settle? How Fashion Giants Recast Plastic as Good for the Planet How to watch Vanderbilt basketball vs. Mizzou on TV, live stream