With Fortnite WinterFest 2021 over, players who participated in the event have completed a bunch of quests to earn multiple free rewards. Ever since 2019, Epic Games has capitalized heavily on the holiday season by introducing multiple holiday themed skins to the Item Shop.

However, free-to-play players can always participate in the WinterFest event and earn exclusive winter themed rewards. Obviously, free skins are always appreciated by the Fortnite community and it has led to December seeing a huge surge of players dropping into the game. However, this time around, WinterFest saw the game crash and go into downtime because of the heavy traffic on the servers.

What was your thoughts on Fortnite Winterfest 2021?

What was your thoughts on Fortnite Winterfest 2021? https://t.co/XGBvFKElsB

However, compared to previous editions of the event, some players are not satisfied with the free rewards that were given out in WinterFest 2021. One of those is popular YouTuber ITalk who made an entire video with his opinions about the free WinterFest 2021 skins.

I Talk is a popular YouTuber with over one million subscribers and strongly feels that the WinterFest 2021 rewards were ‘lazy.’ The reason he provided behind this argument is the release of reskins instead of any original skin during the event.

“Personally to me, this just oozes with laziness. Without taking into account that all three of the outfits we got were re-skins, two of them were re-skins for the same skin. […] Blizzable could simply be an edit style for Krisabble. There was zero reason as to why these (two skins) were separated.” 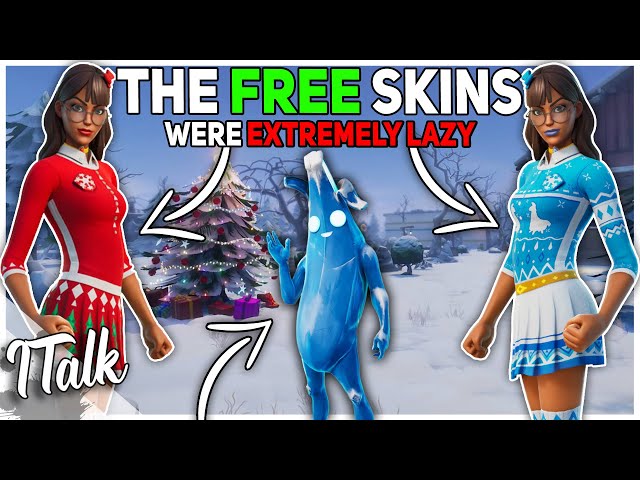 Apparently, I Talk is not the only internet personality complaining about the skins. Several players have opened up on social media sites and their opinions match with the YouTuber’s.

Re-skins have proved to be very successful for Epic Games as players who do not possess the OG skins from earlier seasons are often delighted to receive the original re-skins. This also applies to new players who have recently joined the community and are currently basking in the hype of the fan-favorite battle royale title.

I’ll be truthfully honest, but this winterfest suck to me, the reward were OK, the snowball launcher was probably the best one this winterfest, the missions weren’t that bad to do, the lazy 3 skins we’ve got sucks and probably won’t wear them at all

I’ll be truthfully honest, but this winterfest suck to me, the reward were OK, the snowball launcher was probably the best one this winterfest, the missions weren’t that bad to do, the lazy 3 skins we’ve got sucks and probably won’t wear them at all

Here’s to hoping Epic Games takes the entire community and their opinions into account the next time they decide to release a series of free skins into the game. Need a raise? Here’s how to negotiate with your boss