Elvis Presley’s family get hands and feet print in Hollywood The Presley family made history on Tuesday as they were immortalised with a coveted Hand and Footprint ceremony outside the TCL Chinese Theater in Hollywood.

Three generations of the famous family – The King’s widow Priscilla, 77, her daughter Lisa Marie, 54, and her own daughter Riley, 33, as well as her twins Harper and Finley, 13 – were seen side by side a the lavish event before placing their hands into the cement.

Also in attendance was Austin Butler, who plays the legendary rock star in the new biopic Elvis, and the film’s director Baz Luhrmann.

Five strong women: Three generations of Presleys – Priscilla, 77, (centre) Lisa Marie, 54, (second left) and her daughter Riley, 33, (second right) as well as her twins Finley and Harper, 13 (far left and far right) – were seen side by side at the Hand and Footprint Ceremony held outside the TCL Chinese Theater in Hollywood 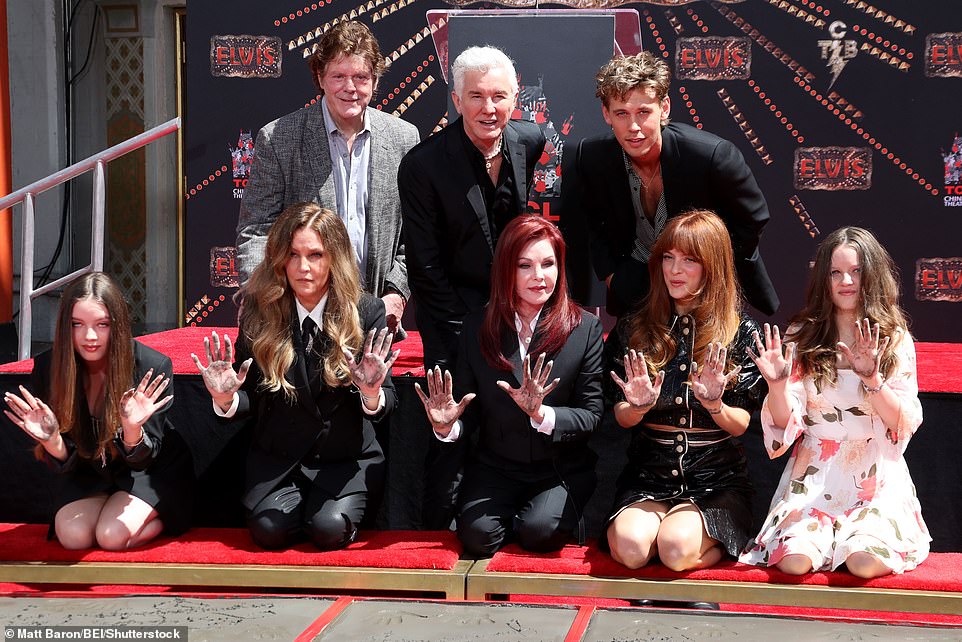 A party: The famous family were in attendance for the ceremony which saw them place their hands in the cement, with Austin Butler, who plays The King in a new biopic (top right), and the films director Baz Luhrmann (top centre) also at the event

Lisa Marie wore a black suit with tie and a crisp white shirt with her highlighted hair in loose waves.

She was with her mother Priscilla, who looked youthful with her reddish hair parted on the side as she had on a black suit with white shirt but no tie. 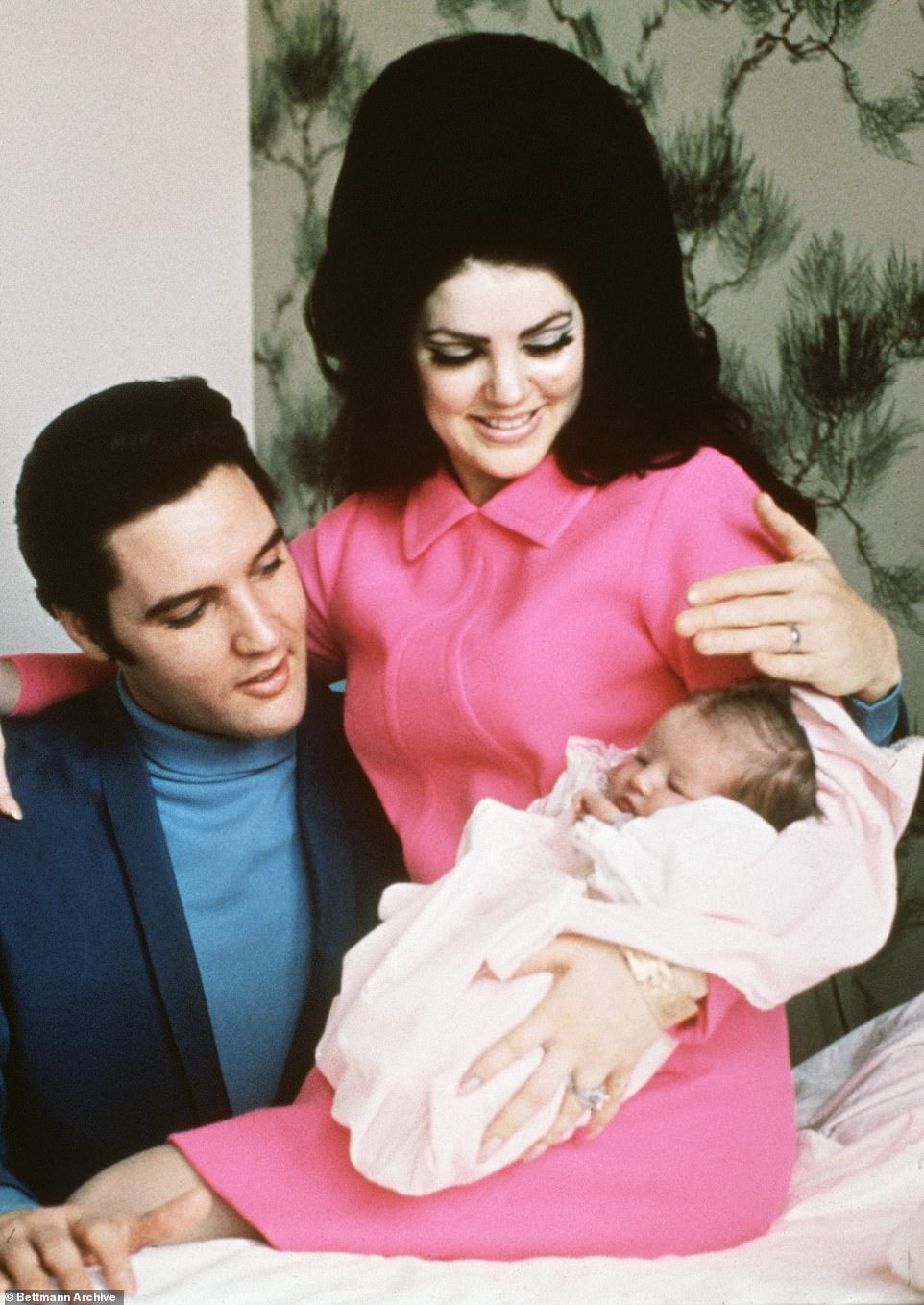 The king: Elvis Presley and his wife, Priscilla, are pictured preparing to leave the hospital with their new daughter, Lisa Marie, in Memphis, Tennessee, in 1968 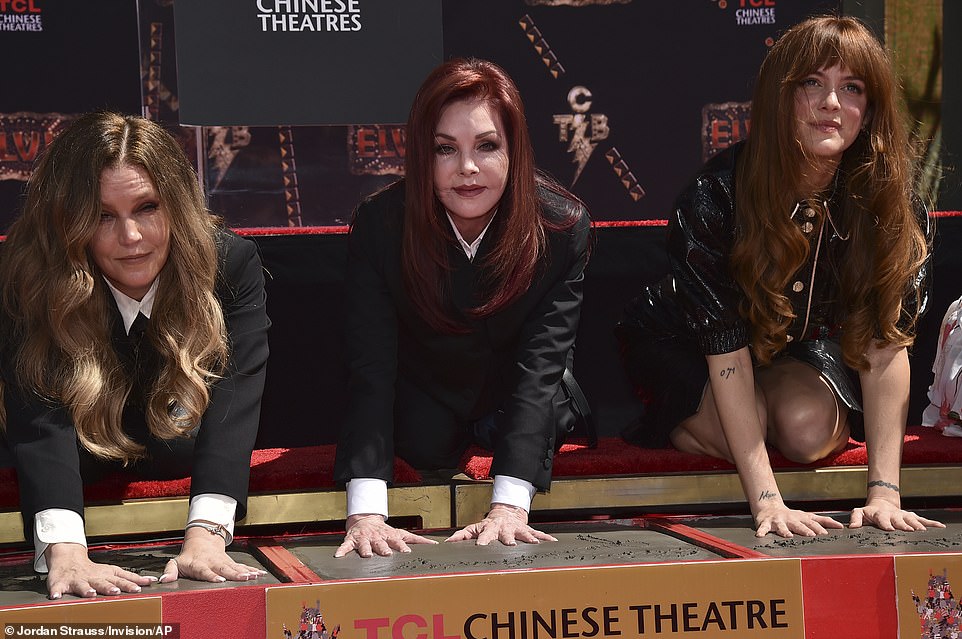 Three of us: Lisa Marie, Priscilla and Riley (pictured left to right) were seen side by side as they placed their hands in the cement outside the Chinese Theater 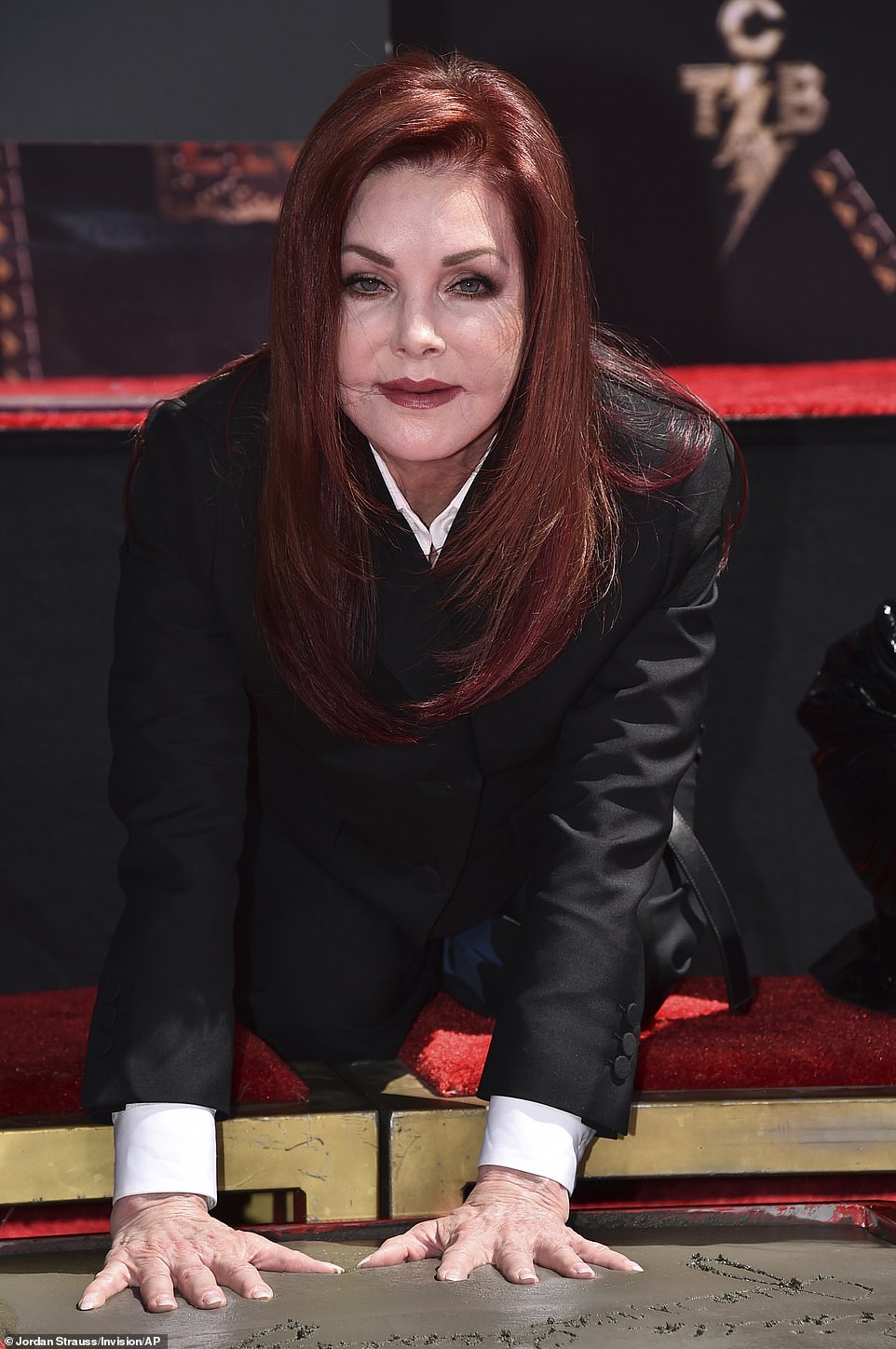 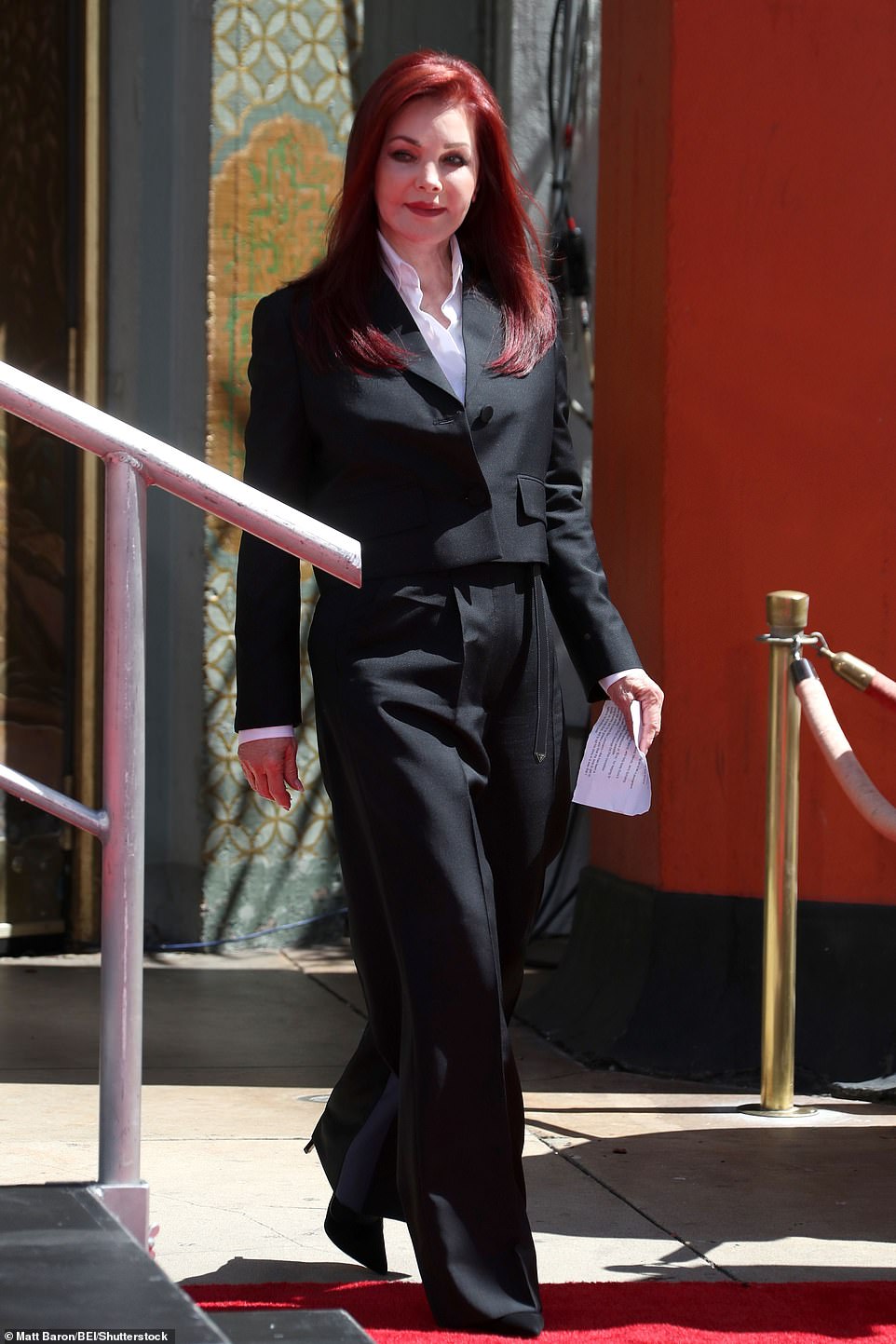 Suited and booted: The star sported a chic black suit with a crisp white shirt as she arrived for the ceremony 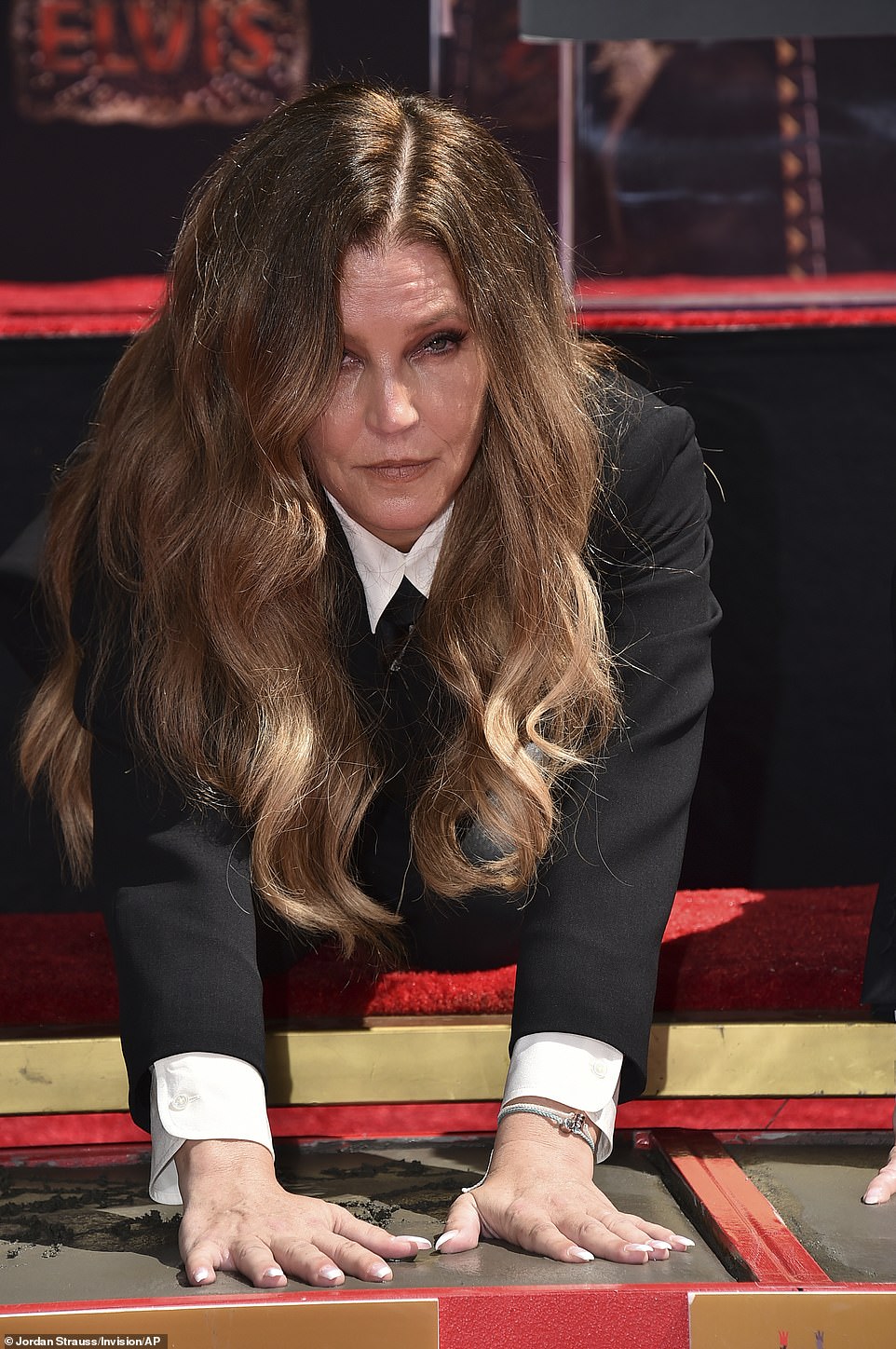 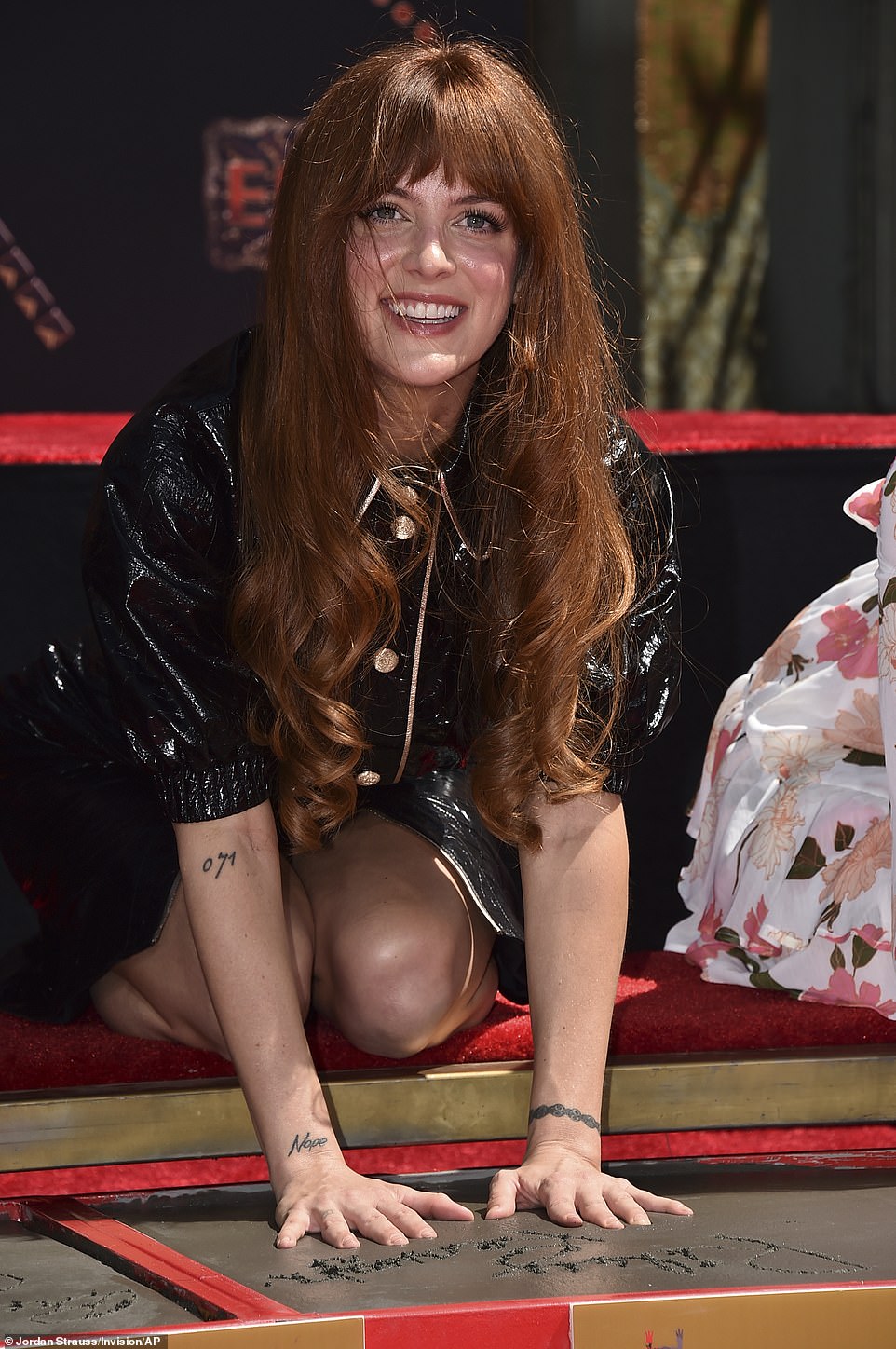 Dressed up: Riley was seen in a black dress as she showed off her many tattoos

Riley has carved out an acting career for herself as she has starred in Mad Max: Fury Road and Zola.

That made for three generations side by side.

And Lisa Marie’s twin 13-year-old daughters Harper and Finley that she had with ex Michael Lockwood also got their hands dirty.

Rounding out the group photo were Luhrmann and Butler. 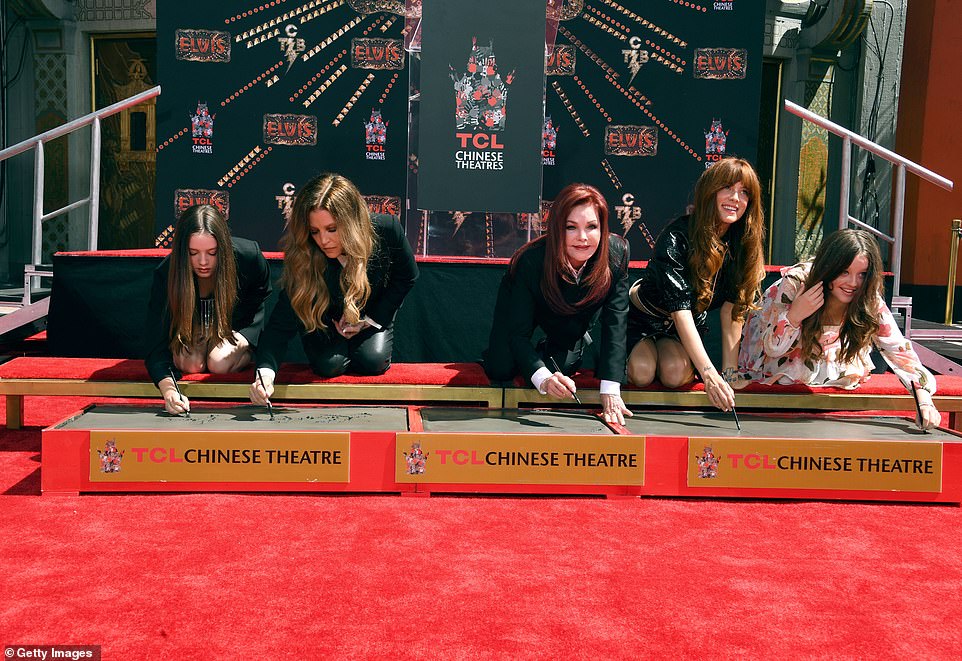 Now signing their names in the cement: All five women (LR Finley, Lisa Marie, Priscilla, Riley and Harper) signed their names alongside their hand prints 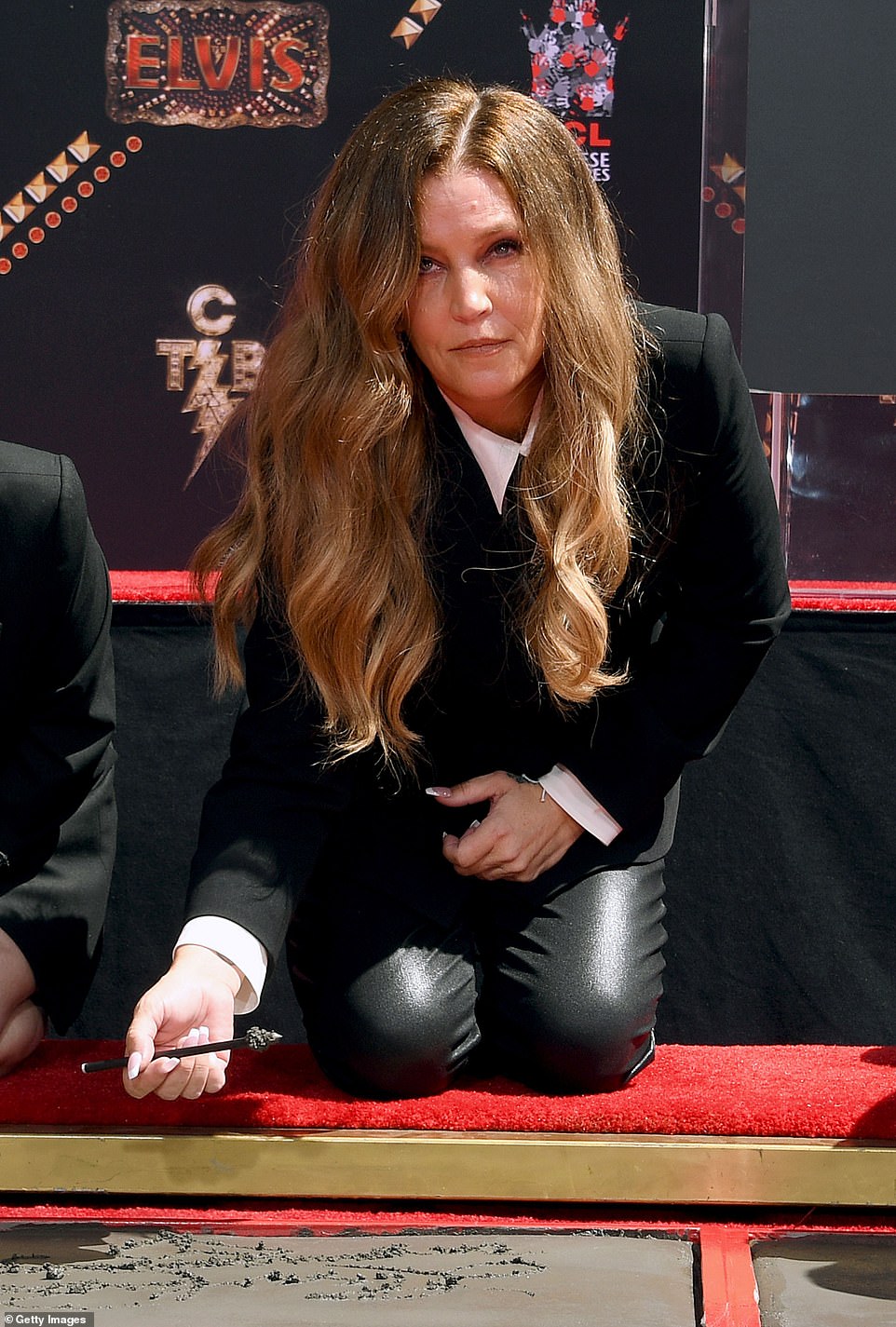 This will last forever: Lisa Marie is seen looking up with the stick in her hand

It was a special event for the family that has come together to celebrate the Friday debut of the new Luhrmann movie about Elvis that covers his childhood and rise to fame.

On Tuesday Lisa Marie said she got emotional over the movie as she discussed it for a 20/20 special called Exclusively Elvis: A Special Edition of 20/20.

While Lisa said the movie made her ’emotional,’ and Riley admitted she cried five minutes into the film. 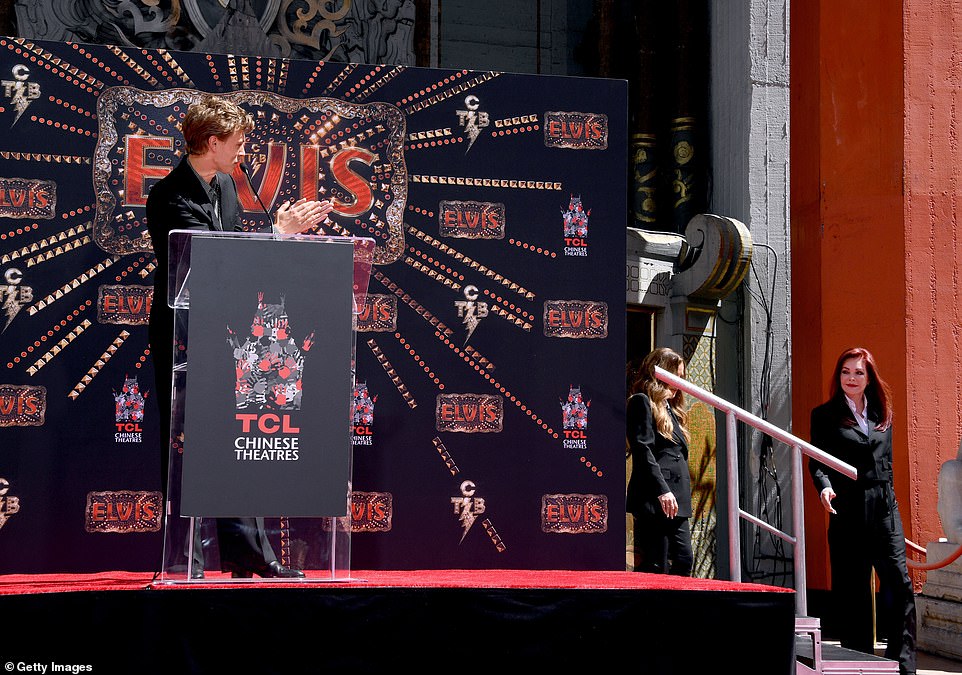 Butler on stage: Having recently taken on the role of Elvis in a much-anticipated biopic, Austin was at the podium as he introduced Priscilla 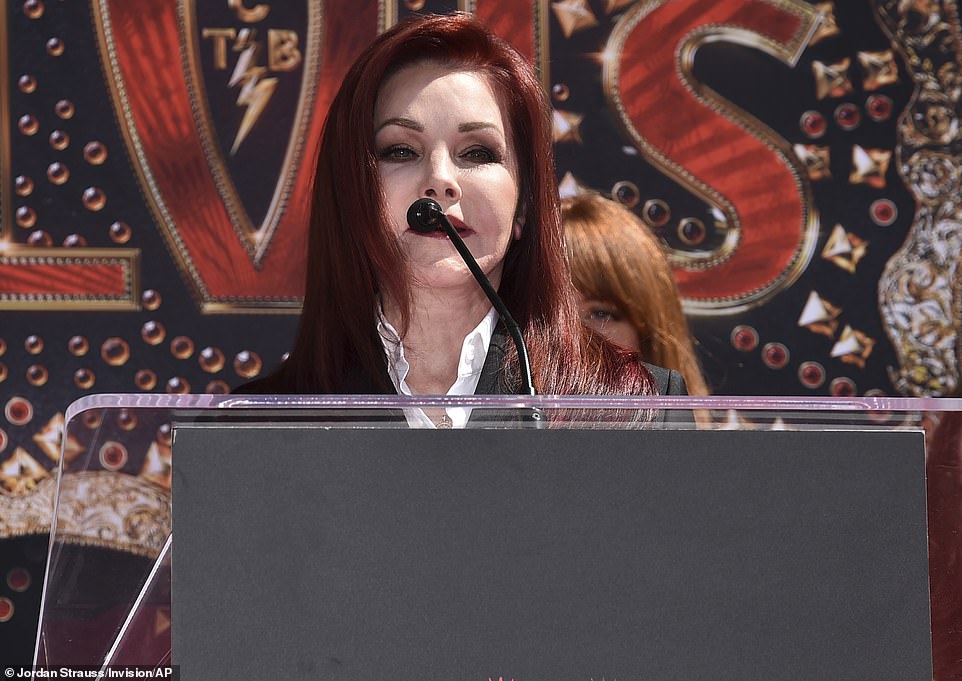 She shared a few words: Elvis’ only wife Priscilla, who has spoken highly of the new film, got up to the podium to speak

The preview for the special aired on Good Morning America, with the interview taking place at Elvis’ old home Graceland in Memphis, Tennessee which has been a museum for decades.

Lisa Marie told 20/20’s Chris Connelly that watching the film was ’emotional’ for her and brought up ‘such generational trauma … in a good way.’

And her mother Priscilla said that she thinks her late husband would have ‘loved’ the film.

‘It was really intense. As a film it’s just an exceptional film,’ added Riley who cried five minutes into the movie.’ 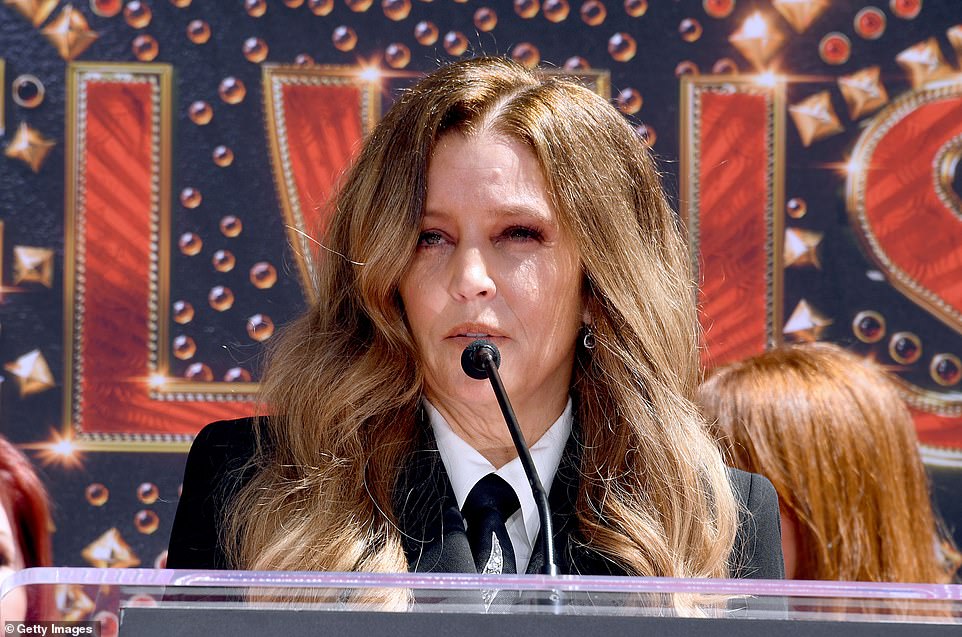 Thoughtful words for her dad: And Lisa Marie took time out to comment on the film too 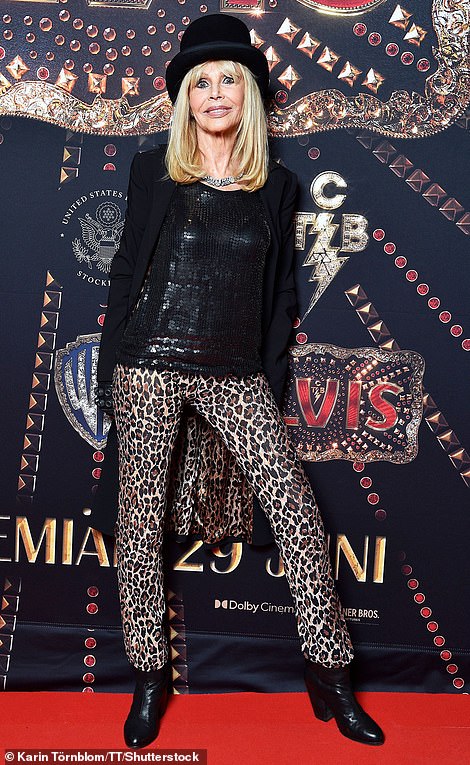 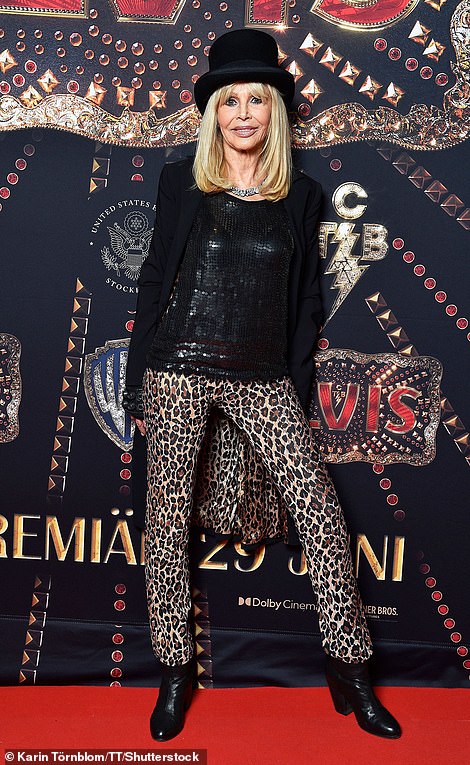 Stylish: Elsewhere Britt Ekland was among the stars in attendance for Elvis’ premiere in her home nation of Sweden, after she previously starred in Elvis’ 1960 film GI Blues during the earliest days of her career

The title role of Jailhouse Rock singer Elvis – who died in 1977 – is played by Austin Butler. ‘I wasn’t thinking about what I was physically going to do, I felt like I was looking out through his eyes,’ said Butler during the 20/20 special.

Tom Hanks plays Elvis’ manager, Colonel Tom Parker. On the special, he said he didn’t realize that Elvis brought sexuality to the stage for the first time.

This preview comes just after Luhrmann revealed there is a four-hour version of his Elvis film, which he had cut down to its current two hours and 39 minutes running time. 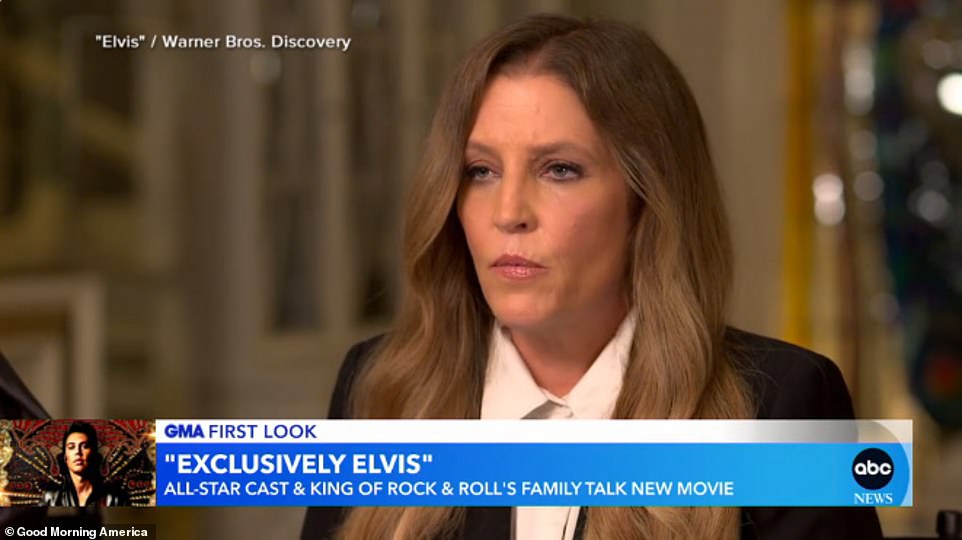 Talking dad: On Tuesday Lisa Marie said she got emotional over the movie as she discussed it for a 20/20 special called Exclusively Elvis: A Special Edition of 20/20 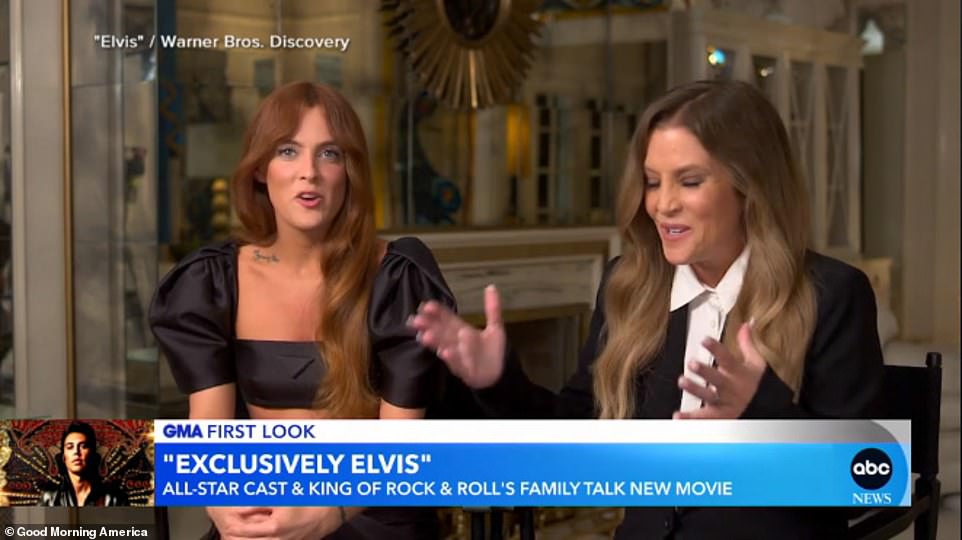 Goin’ to Graceland: The interview took place at Elvis’ old home Graceland in Memphis, Tennessee which has been a museum for decades

Luhrmann would’ve like to have included more about Elvis’ romance with his first girlfriend, Dixie, as well as his relationship with his band in the motion picture.

The film tells of Elvis’ childhood and his rise to stardom as well as his relationship with his manager Colonel Tom Parker (Hanks).

Luhrmann added to RadioTimes.com: ‘I would have liked to lean into some of the other things more – there’s so much more. I mean, there’s lots of stuff that I shot like the relationship with the band, I had to pare [that] down – and it’s so interesting how the Colonel [Tom Parker] gets rid of them.

‘The relationship with his first girlfriend, Dixie, you know. And later on how… once he’s caught in a trap, and he’s discombobulated and doesn’t understand … someone who’s got such a hole in his heart like Elvis constantly looking and searching for love and finding it on stage but nowhere else .’ 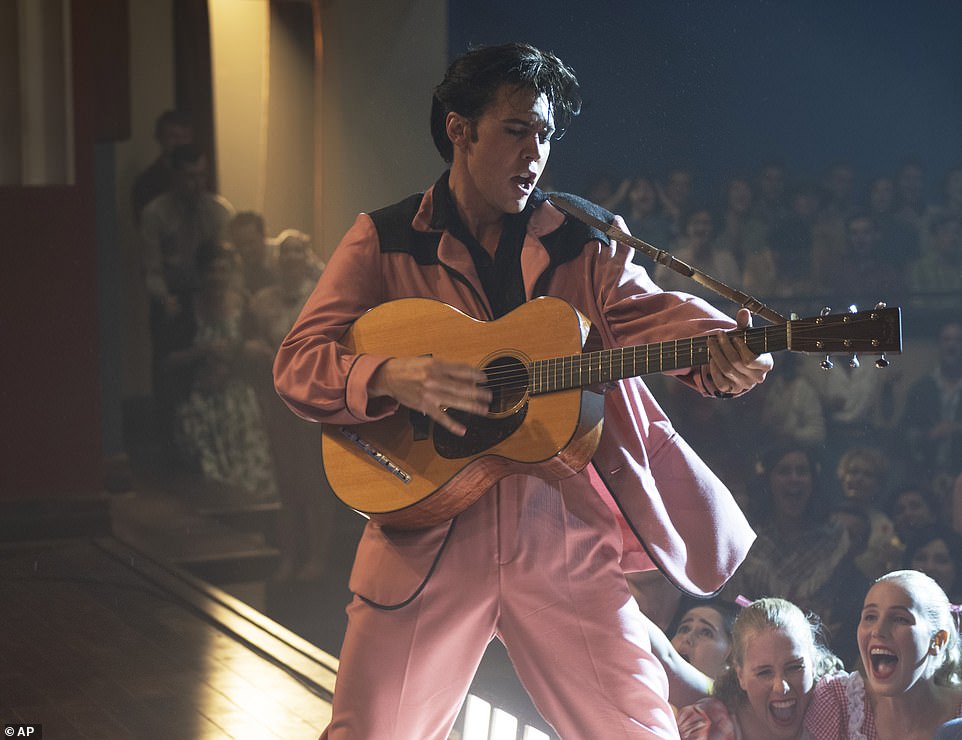 He channeled Elvis: The title role of Jailhouse Rock singer Elvis is played by Austin Butler. ‘I wasn’t thinking about what I was physically going to do, I felt like I was looking out through his eyes,’ said Butler during the 20/20 special

He said: ‘I felt such a responsibility to Elvis, his family, all the people around the world who love him so much.

‘So it was an incredible amount of pressure – and with that comes an immense amount of fear. I started feeling this energetic exchange.

‘And so I allowed my imagination to just truly accept that this is the 68 Special, I’m doing this for this audience right now. My career is on the line.

‘I looked at myself in the mirror – I’m dressed in the leather, covered in sweat. And I had this moment where suddenly I was like, “OK I can do this.”‘ 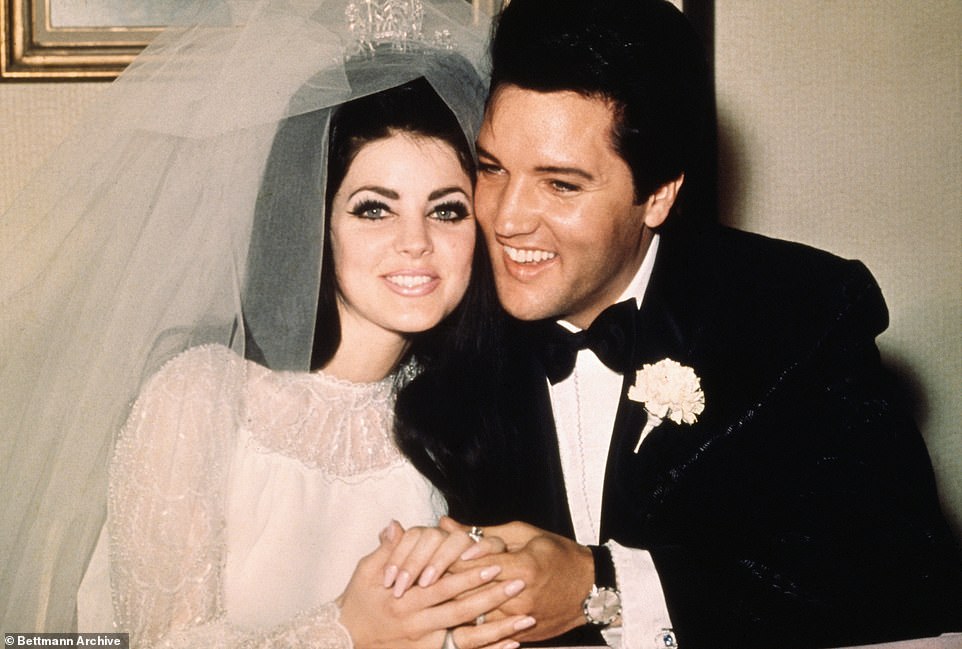 How to fix System Data filling your iPhone’s storage | AppleInsider

When is A.J. McKee vs. Patricio ‘Pitbull’ Friere 2 expected to take place?