One of the best things about Doctor Strange in the Multiverse of Madness is it practically forces you to talk about it once it’s over. The film’s multiple surprises and loose ends leave lots of questions to be answered, so we sat down with one of the few people who has the answers: writer Michael Waldron,

Waldron was the head writer of last year’s hit show Loki and followed it up by writing Doctor Strange in the Multiverse of Madness, He came on board about the same time previous director Scott Derrickson left and new director Sam Raimi was installedso he worked closely with Raimi to give the film the horror vibes (some) audiences are loving as well as all the big twists, turns, and surprises.

Below, you can read our chat with Waldron where we discussed the huge Illuminati reveal, the ramifications of that, the whereabouts of the original Mordo, the importance of Multiverse incursions moving ahead, that big cameo in the end credits, the surprising controversy over the film’s rating, potential Easter eggs throughout, and how and why Wanda broke bad.

Germain Lussier, io9: Jumping right in, let’s talk Illuminati. Obviously, that is the biggest spoiler scene in the film. How early was that in the script and how did you decide who would be a part of it?

Michael Waldron: It was in there from my first draft. When Sam [Raimi] and I kind of started over on this thing and then did our version of the movie, it was in it. It hadn’t been in my outline. It was a surprise to everybody. And I wrote it literally because I was stuck. And I was like, “Man, my second act is kind of boring right now, I’m just going to write in all this crazy shit,” and here we are. And it was a different lineup. I mean, I think maybe a couple of the characters were there. I never dreamed we could get the lineup we did get. It’s crazy.

io9: So in making those decisions how much discussion was there regarding how those people would (or could) play into the future of the MCU?

Waldron: Yes. I mean, there are definitely ramifications, questions, it’s all there. They existed as these heroes in at least one universe. Now, what does that mean moving forward? I guess we’ll find out. But it all, in each case, felt like a really exciting opportunity and thing to tease.

io9: Yeah, absolutely. Now, one thread from the original film that this doesn’t really touch on is Mordo on 616. Where is he? And was he ever a part of this?

Waldron: We talked about him. He’s out there. There were discussions about what to do with his story. But ultimately, it felt like, in a movie that frankly had a lot going on already, maybe that was a story best left for another day with he and Doctor Strange.

Waldron: Well, I guess I think of it akin to it in the way that as soon as the MCU introduced the notion of space, of going to space, they teased Thanos almost immediately. there was Thor, And then avengers was the first movie where there was a threat from the stars. And here comes Thanos. Obviously, there was a big build from there. So I think that maybe I always thought of the multiverse as kind of like, “OK, this is space.” You know, once upon a time, the MCU left Earth and went to the stars, now we’re going into the multiverse. So yeah we’ll see what happens with these incursions. They’re bad news.

io9: Speaking of that, incursions are also our window to the introduction of Clea, played by Charlize Theron. Tell me about how and when that idea got put into place as the end credits scene,

Waldron: We knew that we wanted to introduce Clea. She’s Strange’s great love in the comics and it was felt to me like Strange wasn’t at the point at the start of our movie where he was ready to meet the love of his life. It felt like we had to close the loop with he and Christine Palmer. And so after she gives him her wisdom to not be afraid of loving someone, then it felt like we were right to tease what could be eventually with he and Clea.

io9: So you started with Loki in the MCU, which opened the multiverse, and while we had Spider-Man in the middle, this kind of expands it in a much bigger way. How has your understanding of how the multiverse will work in the MCU changed, and do you feel any certain authorship towards it?

Waldron: The more multiverse stuff you do the more comfortable you are. In television, I think audiences have more time and it can be a little more dialogue-driven. Movies, you know, you have less runway for exposition and all that stuff. That’s always a learning experience. [But] I don’t feel any authorship. I’m standing on the shoulders of just a million amazing comic book writers and great sci-fi writers with this multiverse stuff and just trying to translate it into cool, hopefully, character-driven MCU stories.

io9: Now, obviously it was a nice weekend for the Doctor Strange team, but one of the things that was very weird was this discourse about it being a scary PG-13 movie. It’s almost like people hadn’t seen movies that were released in the last 30 years. But it got me wondering, how much of the violence and tone was established in your writing versus Raimi’s direction?

Waldron: I guess a combination. I mean, I knew I was writing for Sam Raimi, so I tried to go there and Sam was happy to go there if it felt motivated by story and by character. Um, I mean, Raiders of the Lost Ark is one of my favorite movies that is rated… Raiders is rated PG, right?

Waldron: Yes. I mean, people’s heads are melting and exploding. [Laughs] You know, I think the movies that were the most impactful for me were the movies that felt a little bit dangerous to watch as a kid, so it’s kind of fun to feel like we made one of those.

io9: One of my favorite sequences of the movie is when America and Strange first enter the multiverse and we see all these different universes. Tell me a little bit about like, did you describe those specifically in the script or how did those get developed individually? And are there any Easter eggs?

Waldron: That sequence is so much the baby of our VFX supervisor, Janek Sirrs, who won an Oscar for visual effects on The Matrix, He’s an absolute legend and he did such a great job in the movie. But yeah, I mean, there are Easter eggs all over the place. There’s a dinosaur. You can read into whether that’s the Savage Land [or] Living Tribunal we see. All sorts of cool stuff.

io9: There’s also an animated sequence which is kind of interesting.

io9: Very cool. Now, last thing, talk about tracking Wanda’s arc from WandaVision to this. Obviously, she definitely makes the choice to be the Scarlet Witch at the end of that but I feel like audiences are probably surprised that she becomes a full-on villain here. So tell me a little bit about making sure that that tracked all the way through.

Waldron: Yes. I mean, it’s an accelerated descent into madness for her, but one that felt earned by the fact that she walked away from WandaVision with the Darkhold and the knowledge that she was the Scarlet Witch. The last scene of that show, their tag, is her reading the Darkhold and hearing the voices of her children. I think [in] this movie the Darkhold has got its hooks into her and really what it’s preying on and is maybe even less than her grief but her anger. Residual anger from all the trauma that she’s faced in her life. And I also think Wanda makes good points in this movie. That all these heroes are hypocrites. Stephen and these guys break the rules and they’re their heroes. She does it and she’s a villain. That doesn’t seem fair. And they push her to her breaking point and you see what happens.

Doctor Strange in the Multiverse of Madness is now in theaters.

Correction: Indiana Jones and the Temple of Doom was not the first PG-13 movie. It was actually rated PG but is usually given as the prime example of a film that made the PG-13 rating possible. Red Dawn was the first, official, PG-13. A note was made above. 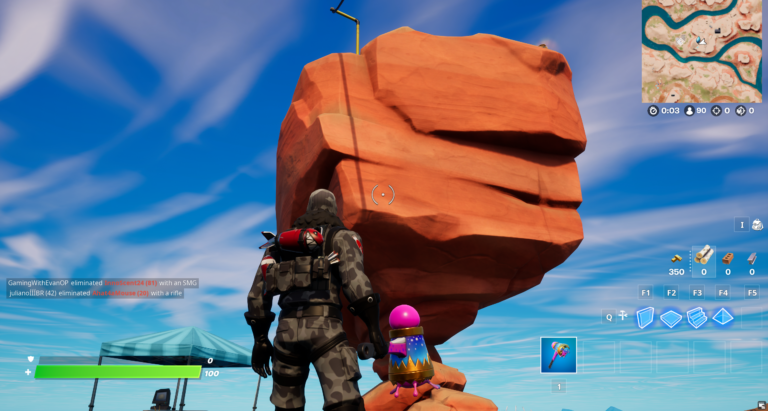 Where is the Impossible Rock in Fortnite?

Apple politely explains why iPhone cases are a waste of money