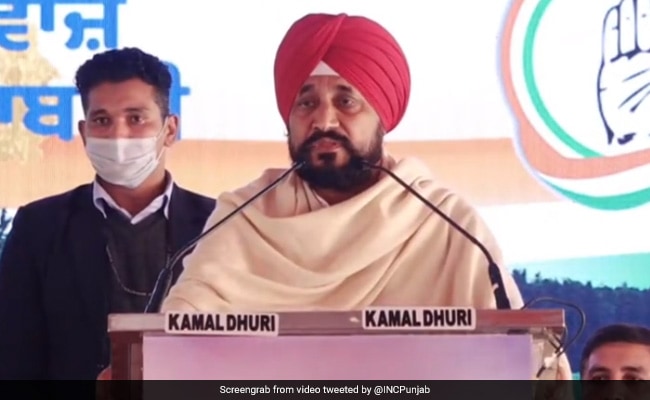 “It is indeed sad that out of 3 crore Punjabis – Congress chose a person who is accused of illegal sand mining and transfer posting scam as their CM candidate,” Mr Chadha wrote on Twitter.

It is indeed sad that out of 3 crore Punjabis – Congress chose a person who is accused of illegal sand mining and transfer posting scam as their CM candidate.
Our reaction 👇 pic.twitter.com/bOWCVJcuKs

In a self-made video, Mr Chadha said, “It is sad that Congress has made such a person as their Chief Ministerial face who sold even the sand of Punjab. The person on whom all serious allegations are framed like illegal sand mining, transfer-posting scam. The person whose nephew’s house when raided was found to have Rs 10 crore in cash, luxury cars, has been made the CM face.”

“They chose such a candidate in whose constituency illegal mining was going on which was exposed by the Aam Aadmi Party. Among three crore Punjabis in the state, did Congress find only such a man? They found such a man who could not live without corruption for 111 days,” he said.

The AAP leader further said that the people of Punjab have to choose between a “dishonest and a hardcore honest man”.

“The people of Punjab have two options, on one side there is a dishonest man who has such serious allegations, and on the other hand, there is a hardcore honest man who left the career of crores of rupees, and raised the voice of Punjab till Lok Sabha. Please give a chance to Aam Aadmi Party and Kejriwal,” he said.

Punjab Congress president Navjot Singh Sidhu, who was also present in the rally, in his speech before Rahul Gandhi, said that “he will accept the decision of Rahul Gandhi.”

According to law enforcement, thefts of catalytic converters are becoming more violent