Park Seo Joon is famously known as the king of romantic comedy and he has proven over and over again that he deserves that title. Park Seo Joon is like a chameleon; he can adapt to any character and perfectly bring them to life. His boundless charisma, sense of humor and irresistible visuals make him one of the most talented South Korean actors in the industry.

Here are some of his dramas to watch as we await his Hollywood debut in the Marvel movie series. 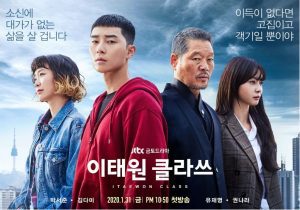 In one of the most successful series, Park Seo Joon takes the role of Park Sae Ro Yi, who was from school after punching a bully who also kills his father in a car accident, Jang Geun-won, the son of Jangga Group’s founder. He is later sent to prison. When he was in prison, the woman he loved, Oh Soo-ah, was offered a scholarship by Jang Dae Hee, Jangga group founder.

Oh Soo-ah later became the strategic planning head of the Jangga group. When Park Seo-Joon was released from prison, he opened up a bar but he failed to manage the business well. He meets Oh Soo-ah and learns of her job in Jangga Group.

The series revolves around the story of Park Seo-Joon, a vice chairman of a major corporation, and his secretary Park Min Young, The secretary decides to resign from her job as she cannot handle seeing the vice chairman with other women. The undeniable love between the two even makes the series more beautiful and romantic to watch. The vice chairman tries everything in his power to keep her from resigning from her job. A love story has been unfolding for nine years while working with each other. This historical drama remains a favorite among Seo Joon fans as it led to the start of the Wooga squad, In this drama, Seo Joon plays the role of Moo-myung. A man of low birth who joins an elite group of young men called Hwarang. The Hwarangs . The Queen created this group to protect the crown prince but in the end the young men bond through passion, friendship and love and desire to protect the Silla Kingdom.

In this slice of life drama , Seo Joon teams up with the amazingly Talented Kim Jiwon , He plays the role of a young man ( Ko Dong-Manstruggling to follow and find success in his life-long dream to become a martial arts champion. As he fights for his dreams he also realizes he is in love with his childhood friend Choi Ae-ra and fights for his heart as well. Park Seo-joon plays the role of Oh Ri On, Oh Ri Jin’s brother. The story of a successful heir who battles dissociative identity disorder. He is secretly helped by a first-year psychiatric resident, Oh Ri Jin. Her brother is a writer who is determined to uncover the secrets of the heir’s family. He starts following his sister around to learn about the life of the successful heir. Based on a real-life story, Park Seo Joon plays the role of Ji Sung-joon, a deputy chief editor at The Most Magazine publishing office, and Kim Hye-Jin, his childhood friend. Park Seo Joon was once a chubby young boy with low self-esteem while Kim Hye-Jin had come from a rich distinguished family which later went bankrupt. The young girl was faced with difficulties and lost the beauty she had.

The two decide to meet after a long time. Kim Hye-Jin, afraid to disappoint the young man, sends her friend instead to meet with her childhood friend. Unfortunately, she also gets a job at the publishing office where Park Seo Joon is the deputy chief editor. He does not recognize her and ends up mistreating her and calling her clumsy in their place of work. Watch the sensational story of the two in the amazing series.

And there we have it, our list of the best Park Seo-Joon k-dramas of all time!

What do you think of our list? Have we included your favorites? Or have we missed any must-watch dramas? We love to hear from you so do feel free to let us know in the comments below. ‘Stranger Things’ Is Back. Here’s Where We Left Off in Season 3.

Babysitting rates: What are you paying?