The Elden Ring servers are scheduled for downtime on March 1st, 2022.

Elden Ring was released three days ago for all platforms. The game has received universal acclaim and is one of the highest-reviewed games of all time. When the game released, there were more than 900,000 viewers watching streamers play the game making it the third largest Twitch debut of all time.

According to Steam Charts, the all-time peak of the game stands at 807,951. Although the game has received almost perfect reviews, the PC version of the game has come under constant criticism for having framerate issues.

There are guides that have been released on how to fix these issues, but Bandai Namco has stated that a future patch update will address these issues. The Elden Ring servers will be going down for scheduled maintenance today (March 1st) and here’s the time they’ll go down for each platform. 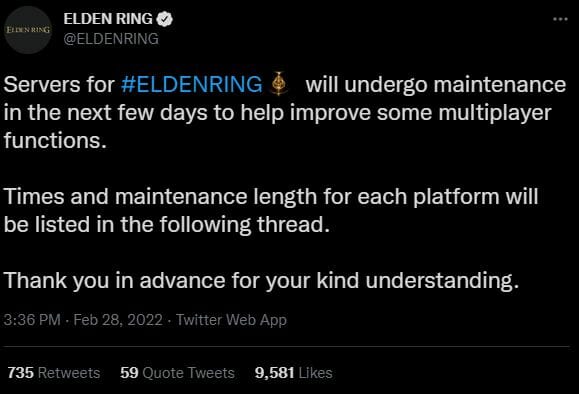 Here’s the schedule for the server maintenance downtime for each platform today, March 1st, 2022:

It’ll be interesting to see if this is also used as an opportunity to push out a patch update to address some of the other issues that players are facing with the game. If there is an update, we’ll include patch notes as soon as they’re available.

How to watch the GAMERS GALAXY: Dota 2 Invitational

Instagram becomes the most downloaded app in the world | Tech/Gadgets

When is Yugioh Master Duel mobile coming out