16
SHARES
1.5k
VIEWS
Share on FacebookShare on TwitterShare On LinkedIn
Many tech workers quit their jobs during the pandemic, part of the wave known as the Great Resignation. But some, it turned out, didn’t so much leave the workforce as change their relationship to it, deciding skills that rather than commit to being an employee of one company, they could “rent” their to many.

Adam Grant, an organizational psychologist at Wharton, said not everyone is going to work this way. But for workers in the subset of the economy who want the flexibility and freedom to make their own schedules and choose whom they work with, collaborating with others in remote teams can feel more secure than being on your own.

It is part of the “universal human quest,” according to Grant, to say, “I want to be unique, but I also want to belong.”

Grant has been interested in teams for quite some time. He has written several books on the data and science behind the motivations that drive people and organizations. In 2018, he met Raphael Ouzan, an entrepreneur who was starting to notice that many of his peers were looking to escape rigid work structures that would not allow them to choose their collaborators or projects. The two kept in touch.

The gig economy was by then firmly entrenched, but most of the opportunities in that economy, whether working with Uber, DoorDash, Upwork or Fiverr, involved short-term, simple tasks.

“The system is very commoditizing,” Ouzan said. “There wasn’t much out there for people who want to pursue a craft with autonomy.”

In 2020, Ouzan helped start A. Team, a members-only platform for companies and those it calls “product builders,” or people who help develop software. Ouzan believes “cloud-based teams” can quickly integrate into any company, no matter where they are in the world, and represent the next generation of the gig economy.

A. Team now has 4,000 tech workers and more than 200 companies on its platform. The company announced Tuesday that it raised $55 million in funding in a round led by Tiger Global Management, Insight Partners and Spruce Capital Partners. Additional investments came from Jay-Z’s company Rocnation; the founders of CAA, Apollo and Fiverr; and Grant.

“So many of the greatest achievements in human history are attributed to groups of people, but also our biggest frustrations are when we’re working in teams of people,” Grant said. “I’ve been anticipating for years that the future of work would have more opportunities, especially for people in the knowledge and creator economies, to be freelance but have a structure behind that freelance.”

The pandemic has changed a lot about how we work, Grant said, and “a possible silver lining of COVID is we’ve been forced to be more thoughtful and more intentional about our collaborations.”

Amélie Beurrier, a product manager and designer, is one of those workers Grant is referring to. She has worked for startups and bigger companies like Amazon, but what she most enjoys is the freedom of working for herself while in teams with others. A little less than a year ago, she heard about A. Team from a friend and decided to apply to the platform. (A. Team has an application process that includes “technical interviews and algorithmic evaluation,” the company said in a statement, and members are “constantly evaluated” as they work on projects.)

Angelo Stracquatanio, CEO of Apprentice, which develops software for life sciences, turned to A. Team during the pandemic when his company needed to ramp up quickly. It gave him access to “20-plus engineers pretty much overnight,” he said. 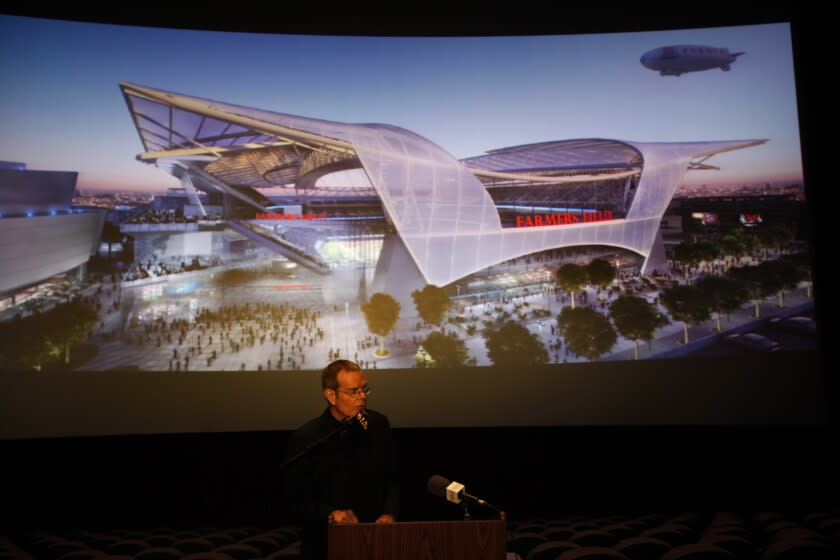 Before SoFi Stadium: Renderings of what might have been for the NFL in L.A.